Becoming a B Corp: Using business for the power of good 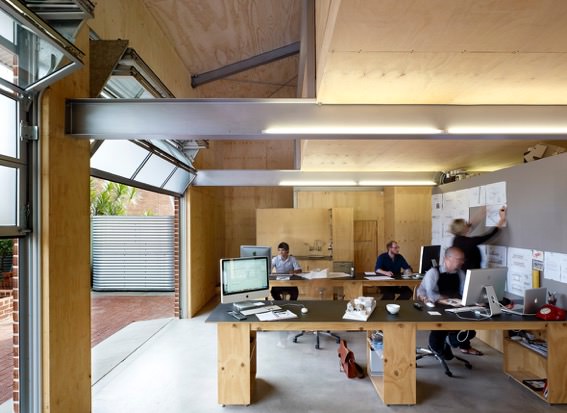 UPDATE! Congratulations to Dunn and Hillam, now recognised as a B Lab Best for Workers Honoree.

Once Dunn and Hillam Architects learned of the philosophy and values fostered by B Corp, joining became a no-brainer. Lee Hillam explains the benefits of becoming a B Corp.

‘B Corps are for-profit companies certified by the non-profit B Lab to meet rigorous standards of social and environmental performance, accountability and transparency.’

The ‘B’ in B Corp stands for benefit. That is not to say that every company does not provide benefit, but B Corps set themselves apart from the usual way that benefit is distributed, which is primarily to owners and shareholders in the form of profit. B Corps do this too (make profit for their owners, that is), but they also declare themselves as being for the benefit of their employees, their environment, the community and the world in general.

As a B Corp we have a Declaration of Interdependence (it’s an American idea – see what they did there?). This is not a fluffy pledge. It is a third-party certification (a bit like fair-trade, but for business), and it is a legal framework. In the US, a Benefit company is a type of business with a legal status similar to a Proprietary Limited company, and similar changes to the legislation are underway here in Australia. The main difference in these Benefit companies is when you look into the detail of their constitutions – they state that they do not answer finally to shareholders and owners, but to all who are associated with the company and beyond. This decision is not associated with the ethics of just a few individuals, but is written into the governing structure of the company.

So why did we become a B Corp?

To be completely honest, we first heard of B Corps from another B Corp that invited us in to talk about their office fit-out. They asked if we were a B Corp, as they prefer, where they can, to only do business with other B Corps. So we looked into it and what we found was an organisation and a movement that we felt described the way we had been operating from the start. Like many architects we have always had a strong belief in the role of architecture in effecting positive change in the world, and have also run our practice to be fair and ethical in our management of staff, clients, consultants and anyone else we deal with. So it seemed a logical and easy thing to do. That’s what we thought when we began the process, but I can tell you now the certification process is no picnic. We are also ISO 9001 certified and the process is comparable. The fact that the certification is tough is reassuring though, because it shows they’re taking that certification seriously. Overall it took us about five months, and more than forty hours of office time. In the meantime, we didn’t get that job to do the office fit-out (they went with a D and C fit-out firm), but we’re in touch with those potential clients regardless, because we’re now part of the B Corp community.

What are the benefits?

Once you are a B Corp there are a number of benefits, the first of which relates to networking. B Lab organises many events and runs its own social media platform that encourages networking between B Corps. This means we get to be in a room of like-minded people, who do not need to be convinced of our approach, do not need to test us on our ethics, are generally interested in growing their business, and who are almost exclusively NOT architects. It’s like speed dating for the do-gooders of the world.

The B Corp people we’ve met so far are all interested in expanding their networks, of course, but all seem to also be keen to share knowledge, experience, tips, business ideas, and to enthusiastically support each other in what we’re all trying to do. We’ve met people who run recruitment agencies, charitable foundations, food businesses, clothing manufacturers, business development consultants, marketing consultants, lawyers, investment fund managers and the CEO of an international event organisation. And we’ve learnt something useful from everyone. The fact that we are part of this membership gives us the opportunity to learn enormous amounts from all these other businesses, and also gives us that warm fuzzy feeling that comes from being part of something bigger than ourselves; that is, working for the common good. So this second reason could be nominated as ‘peer support’. It’s wonderful and it’s working.

The third reason is going to sound a bit ‘holier than thou’, but here we go. We know we’re good; we are trying to be the change we want to see in the world and to demonstrate this alternate business model to others. B Corp gives us the impetus, the methodology and the support to be better. That is exciting for us. We now have a homework list of things we can do to improve our score and we are enthusiastically engaged with that list because we know it makes us a better business in this new world of benefit organisations.

The final reason (and this is why we’re writing this article) is that we believe this idea of a Benefit company is important. We wanted to grow the numbers of B Corps that are certified in the world, because the more of us there are, the better known the whole idea becomes and the better it is for everyone.

B Corp gives us the opportunity to surround ourselves with people like us, to learn from them and share ideas, to work together to change the way businesses interact in the world and to establish a network of potential clients, collaborators, suppliers and consultants. B Corp businesses are profitable, stable and responsible businesses, which try to make every decision thoughtfully regarding their impact on the wider world. It is a form of activism that engages with change from the inside, rather than relying on political processes.

We only became a B Corp in May 2016, so the results are certainly not in on whether it is a good business proposition. We believe it will be. However, if that was all we were looking for, we would be missing the point entirely.

To find out more about the Benefit company and the B Corp Certification, follow this link.

Lee Hillam is a director of Sydney-based Dunn & Hillam Architects.