Challenging the Banks’ Discrimination Against ABIC

Warwick Mihaly outlines the findings of the recent survey on the banks and ABIC contracts. The worrying results provided the foundation for the joint submission to the Banking Royal Commission by the ACA, ArchiTeam and the Institute of Architects.

ABIC contracts are published by the Australian Institute of Architects in partnership with the Master Builders Association. They are a suite of plain English building contracts with versions suitable for major, simple and basic projects. They have been in regular use since 2008, apportion risk fairly and have been well tested in the courts. They are the primary contract type used for smaller architect-designed projects, in particular houses.

At first, the issue appeared to be confined to a few very specific cases that involved the Commonwealth Bank and private house projects with contract prices under $1,000,000. The Institute intervened, and received a commitment from the Executive Manager of Valuation Risk and Secured Losses at CBA to amend the bank’s approach to construction loans.1

For a year or two the chatter about thorny bank loans seemed to die away. I remember thinking at the time that CBA’s beef with ABIC must have been an odd misunderstanding and nothing more.

But then at the start of this year, the problem re-emerged and it was suddenly everywhere. The four major banks and a number of minor ones seemed to have joined the party. Houses were still the main target, but there were reports of problems both above and below $1,000,000. Bank-approved quantity surveyors were forced on clients, there was pushback against monthly progress claims, and pushback against architects. The fixed price ABIC contracts were being defined by the banks as cost plus, loans were being refused outright, and – incredibly – one lender objected to the contracts’ red covers.

It was bewildering – the banks were knocking back loans based on incorrect assumptions about ABIC contracts and the work of architects. Architects and their clients could do nothing more than plead reason with this or that branch manager.

And then in May I received a call from a distressed ArchiTeam member, two of whose clients had just had bank loans refused outright. One had been forced to opt for an alternative building contract and had terminated her contract administration services. The other had been investigating loan options prior to commencement, and subsequently cancelled the project entirely. On the phone, my colleague was simultaneously furious and exhausted: she was losing fees and entire projects, and no-one seemed able to do anything about it.

The phone call crystallised the issue for me: in discriminating against ABIC contracts, one of the only contracts with a role on site for the architect, the banks were making it increasingly difficult for architects to secure work.2

But a more recent conversation with another colleague made me realise that the problem runs even deeper.

I fear we’re observing the beginnings of a slippery slope. A couple of banks object to the ABIC contract suite today, and tomorrow none of the banks are willing to loan against it. Next week, with no other suitable architect-administered building contracts forthcoming, the architecture profession is forced to either work only with the mega, mega wealthy or surrender contract administration services entirely. And then next month, a generation of younger architects never have the chance to gain experience on a construction site.

Looking beneath the skin of these persistent reports of discrimination reveals a disturbing consistency among the banks’ construction loan policies. The CBA Credit Policy on Building / Construction Loans states that construction loans are not to be provided for contracts under $1,000,000 where:

It is a natural attitude of banks to favour the familiar, but such widespread opposition to architects and the ABIC contract is evidence of a systematic interference with an essential facet of the architecture profession’s service provision. This is alarming and is as potentially transformative as the rise of the project manager or the advent of novation.

I am joined in my unease by a dedicated coalition of industry bodies receptive to collaboration on an advocacy response to the banks, and eager for meaningful action. Together with my fellow ArchiTeam Director Barbara Moje, I have volunteered my time and energy to a joint advocacy initiative with Clare Cousins, National President of the Institute, and Kieran Wong, then-President of the Association of Consulting Architects Australia.

Led by Clare, we decided in late May that our best strategy would not be to tackle the banks one by one, though we would do that if necessary, nor approach the Australian Banking Association, though we would do that too, but hitch our cart to the runaway horse that is the Royal Commission into Misconduct in the Banking, Superannuation and Financial Services Industry. And to do that, we needed more than rumours and distant anecdotes. We needed evidence.

So, I helped craft a research survey that would underpin our submission to the Royal Commission, to both quantify and qualify the actual effects of the banks’ behaviour on architects, clients, builders and projects. An advisory group was convened to review the survey questions, drawn from the Institute, ArchiTeam and ACA memberships, expanding and refining my early drafts. Staff from the Institute national office then helped pull the survey together and vet it for clarity.4

The survey went live in late June and over the following two weeks we received testimonials of 175 projects from 156 architecture practices.5 This was a strong response, spanning every state and territory bar the Northern Territory, and reflective of both the widespread nature of the bank problem and a common desire to fix it. In the interests of transparency and as a small way of thanking the many architects who contributed their time, on behalf of our advocacy coalition I’d like to share some of the insights gained from our research.

First up, let’s look at the projects themselves. Where are they? Who is working on them? What are they? What are their budgets? What contracts are they using? Which banks are giving them grief? 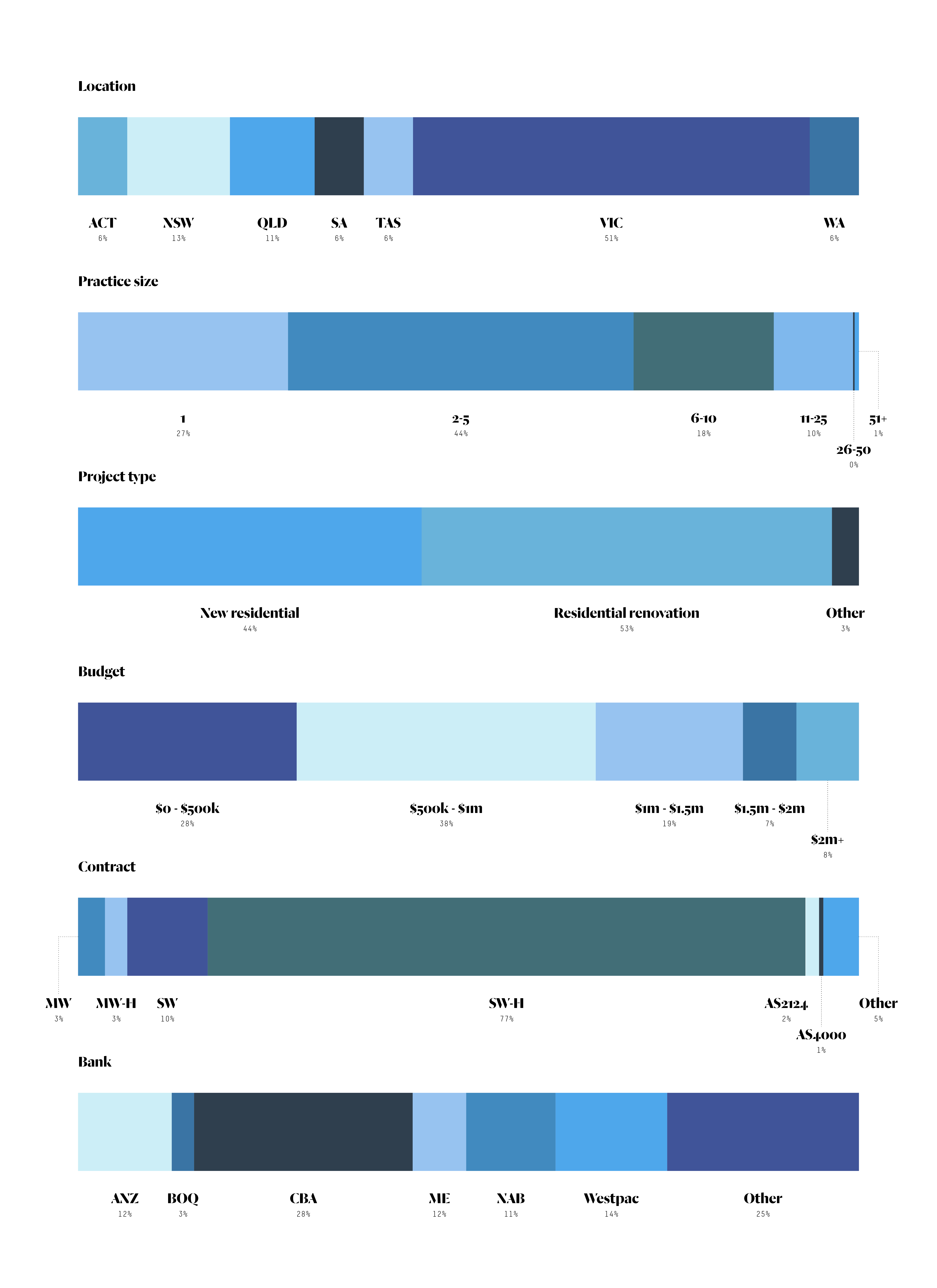 These findings confirm that the bank problem is primarily affecting small residential projects, and the small architecture practices that work on them. They also confirm that the projects are almost entirely single, private houses. Though the architecture practices and projects are small, their contribution to the economy is not – the aggregate budget of the surveyed projects is around $152,000,000.

The high response rate from Victorian architects is intriguing though probably not as conclusive as it appears. It could mean that bank problems with the ABIC contracts are concentrated in Victoria, or responses may have been skewed by the involvement of ArchiTeam and its extensive reach with small practices in Victoria. It is perhaps more telling that the distribution of projects from the other states and territories roughly match their populations: New South Wales is the second largest state with the second highest number of respondents, then Queensland and so on. This could mean that the problem is in fact distributed evenly around the country.

Though the big four banks are responsible for 65% of the reported problems, between them they hold 82% of Australian home loans.6 The other section within the list of banks is long: it includes Macquarie Bank, Bendigo Bank, AMP, Suncorp, Bankwest, Bank of Melbourne, Bank SA, Bank First, Adelaide Bank, St. George Bank, Citibank, HSBC, and various credit unions.

Let’s move onto the banks’ position on the ABIC contracts. What issues are identified by the survey respondents? 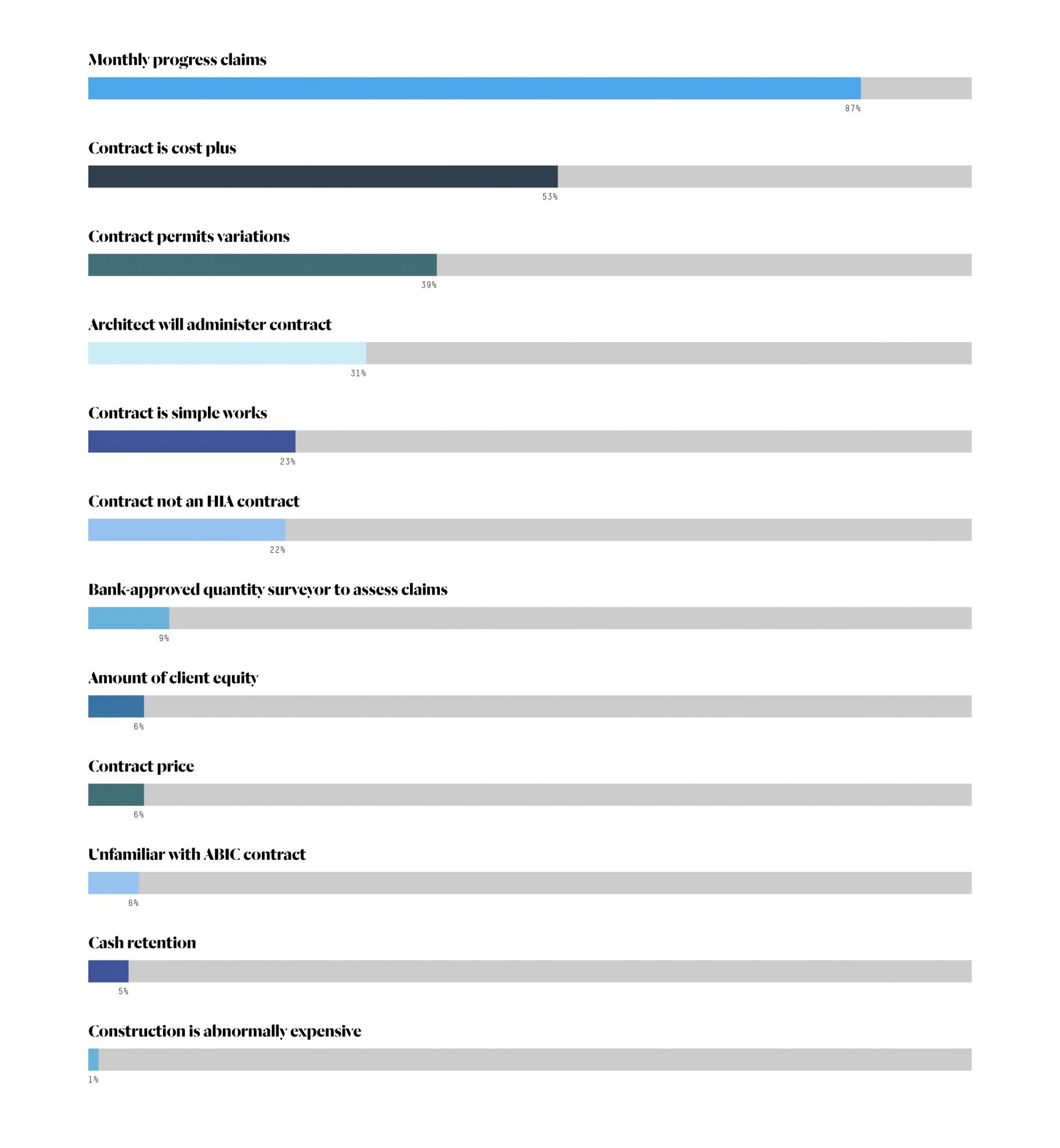 Responses to this section of our research do not add up to 100% as respondents were invited to tick as many issues as were relevant. Across the 175 projects submitted, 483 issues were identified, or 2.8 times the number of projects. Though the banks appear to be united in their dislike of the ABIC contracts, it could be an indicator that they have no real consensus on why they don’t like them.

A few counter-intuitive issues are raised here. Most prevalent is the banks’ distrust of monthly progress claims, despite the architecture profession agreeing that they are in fact fairer than staged payments and less likely to cause a builder to go bankrupt.7

Under the other section of this survey question, respondents also share a number of specific and troubling testimonials worth transcribing:

“The bank believed the involvement of an architect would result in variations.”
“One of the clients is on maternity leave, so there has been some resistance [to providing a loan].”
“[The bank]wouldn’t approve a loan for a construction period of more than twelve months.”

And substantiating the not-so-absurd-anymore rumour I heard:

“The red cover was… a concern to one lender, apparently it stood out like a red flag.”

Now, let’s take a quantitative look at the architecture practices affected by the banks’ behaviour. How are they impacted? What does it cost them? 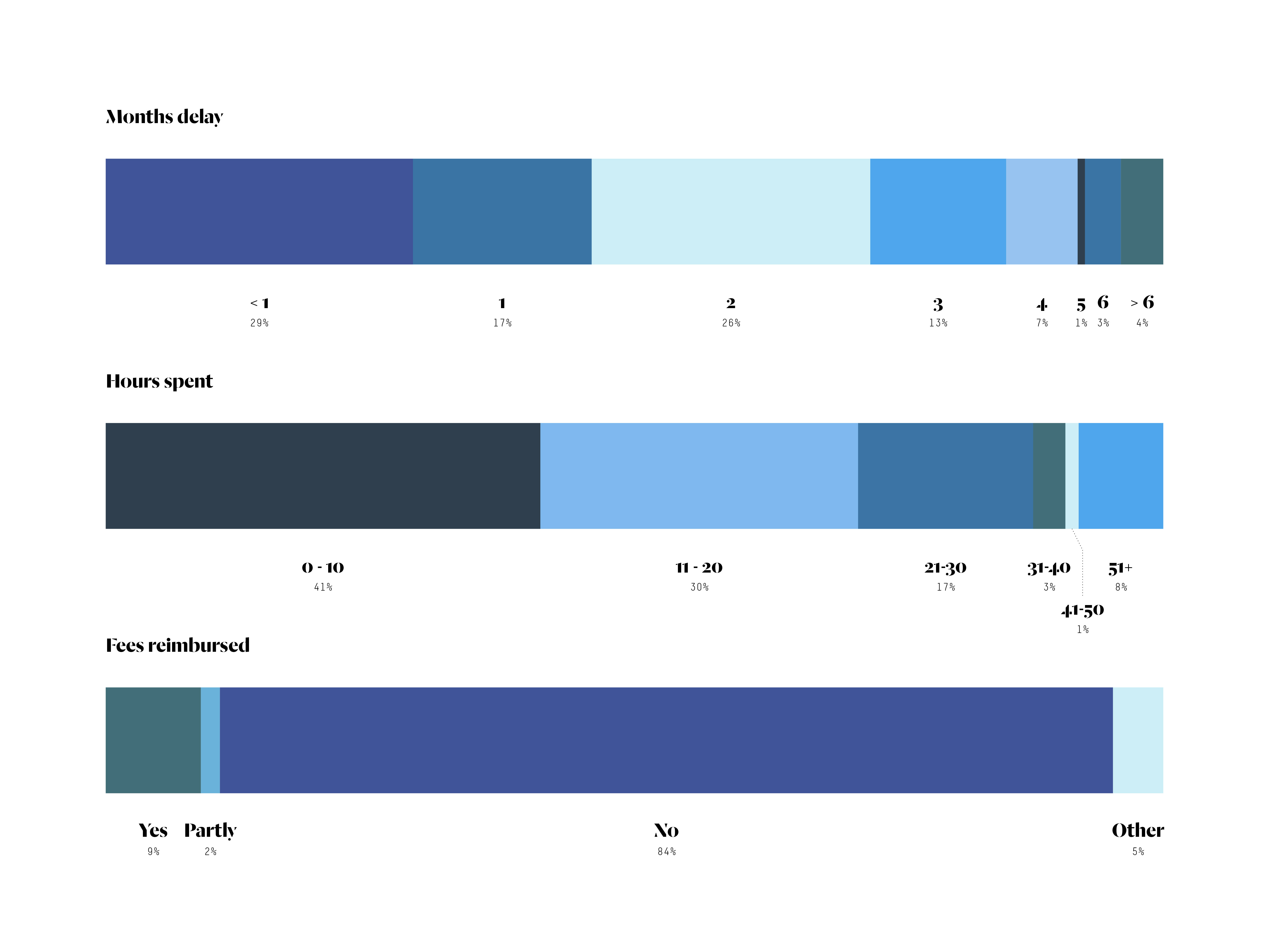 These results clearly show that the banks’ behaviour is delaying projects, and costing architecture practices considerable time and money. Aggregating the banks’ impact on the 175 projects included in the survey data, it is possible to conclude the following:

Now, let’s take a qualitative look at not only the architects, but the clients and builders affected by the banks’ behaviour. How are they impacted? 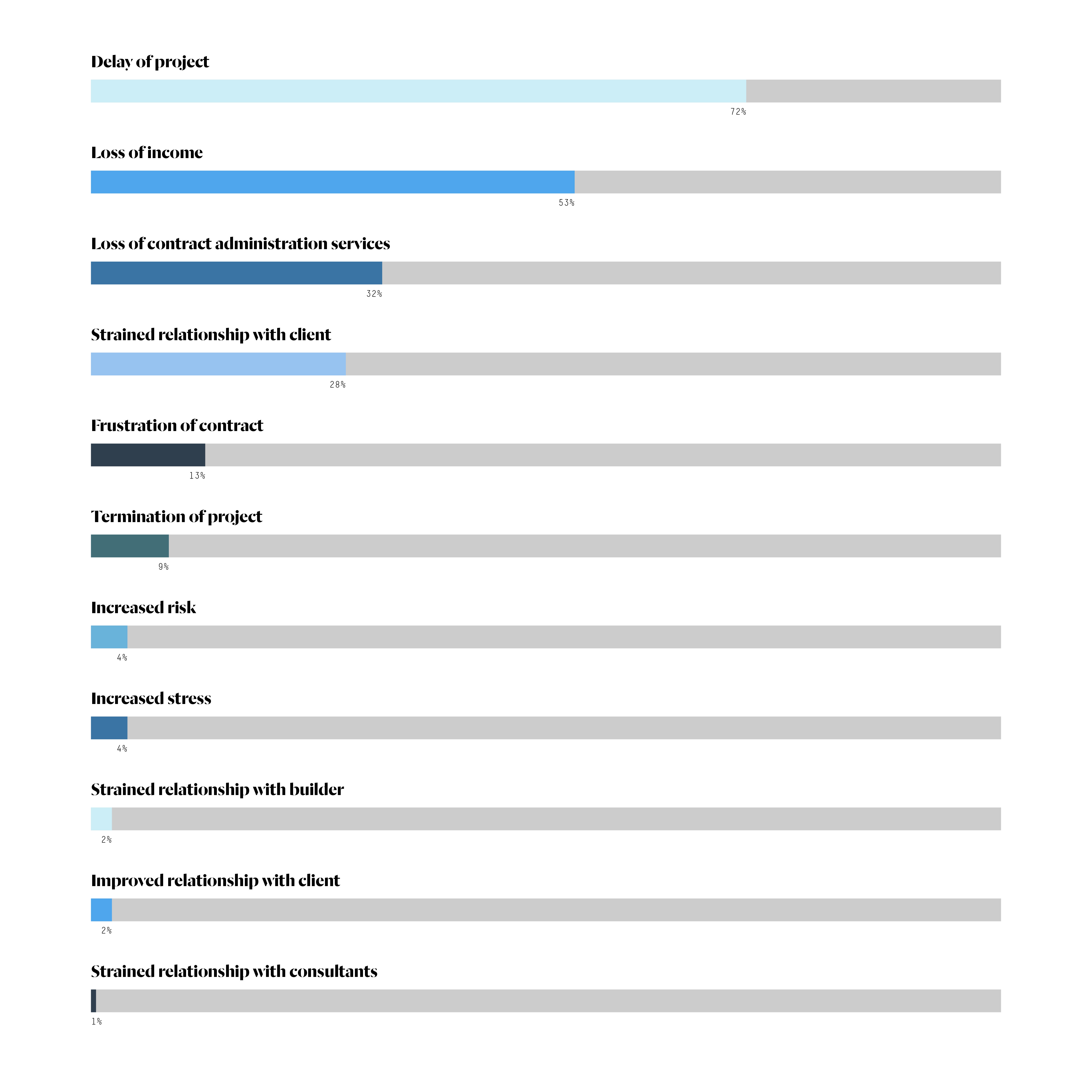 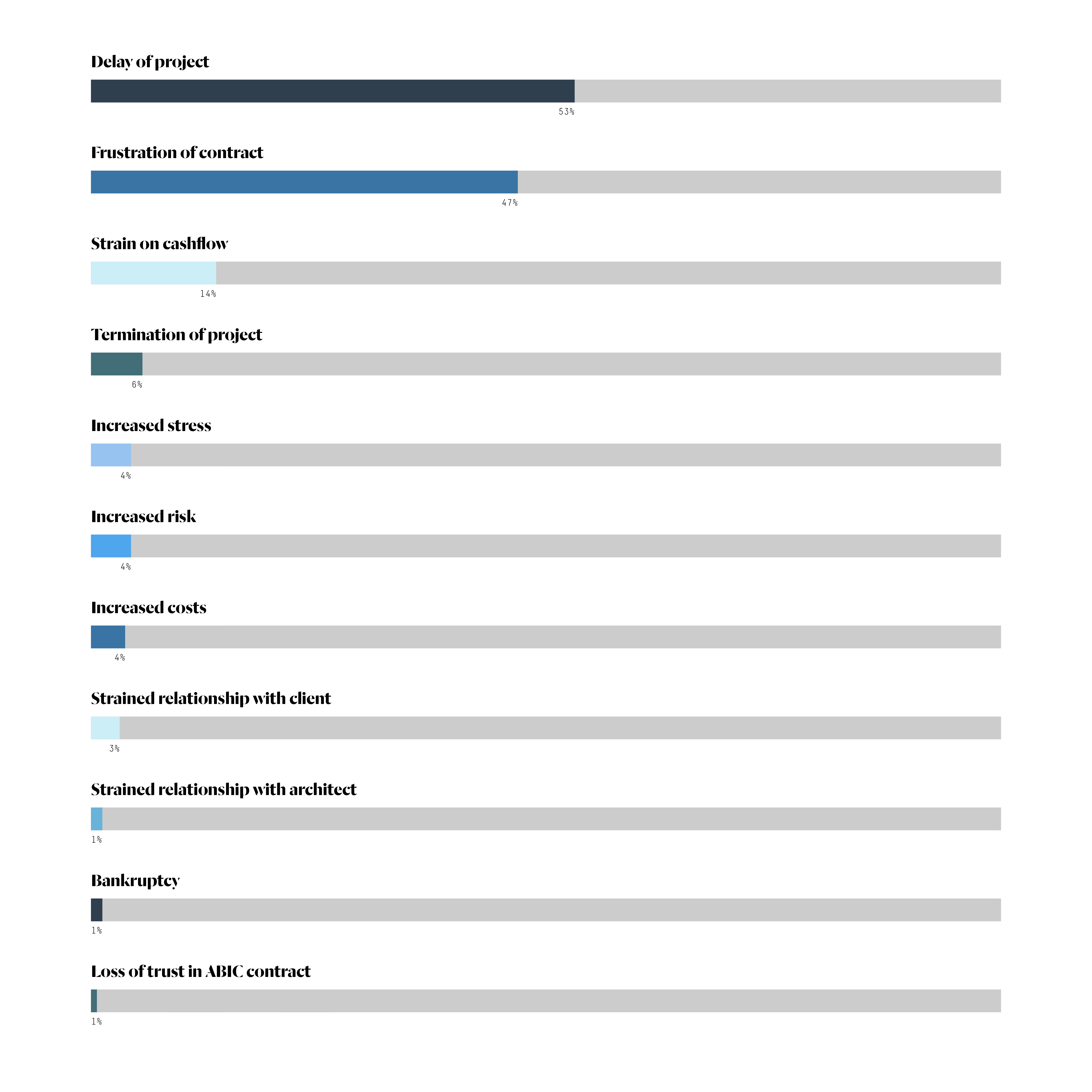 Though the risk of negative effects on the relationships between architect, client and builder is high, the presence of a small number of cases where the effects are positive (2%) suggest that the problem with the banks may be an opportunity for architects to add substantial value to their clients and projects.

As one respondent noted, “[Initially there was] frustration and stress that the project would fall through. But after discussion with [my] client’s finance broker… I increased my client’s confidence in their architect.”

The Institute delivered our submission to the Royal Commission on 21 August. It is a document that seeks to reveal the full scope of the banks’ discrimination against the architecture profession, and against the ABIC contract suite. The testimonials we have collected have been absolutely invaluable and, as hoped, underpin our entire submission. Any updates received from the Royal Commission will be broadcast to members of the Institute, ArchiTeam and ACA.

On behalf of everyone involved in our advocacy coalition, thank you to all those who have contributed your time and energy to our research initiative.

2. Two commonly used Australian Standard contracts, AS2124 and AS4000, have roles on site for the architect, but these aren’t typically used on small residential projects.

5. We only received testimonials from architects with projects affected by the banks. Thus, we aren’t able to extrapolate from our sample group to the industry at large. That said, it is reasonable to assume that the survey respondents are not the only ones affected. The problem is larger, potentially much larger, than the one quantified in this article.

6. Greg Jericho, “The big four banks are getting even more powerful – at Australians’ expense”, The Guardian, 8 February 2018.

7. A number of respondents point out that while the six staged payments regulated on volume-built houses might be suitable for their short construction periods, architect-designed houses can often take twelve months or more to build. This results in negative impacts on builders’ cashflow with progress payments typically two or three months apart.

Warwick Mihaly is a Principal of Mihaly Slocombe Architects and a Director of ArchiTeam. This is a lightly edited version of an article that first appeared on Mihaly Slocombe’s blog, Panfilo, and is republished here with permission.