It’s a topic that is fraught for practices small and large, but the ACA’s Vic/Tas President is an expert. In the first of a series of articles, Madeleine Swain from AR and the ACA’s Paul Viney discuss the most important aspects of fee calculation.

Calculating fees has long been one of the most challenging aspects of running an architectural practice. As well as being the Director of FPPV Architects and Coop Himmelbl(a)u Australia, Paul Viney is also the ACA’s Vic/Tas President. And in this capacity he led the development of the ACA’s Architects’ Time/Cost Calculator, which was built by Big Dog Software’s Jeff Beach.

The third version of the calculator can currently be accessed on the ACA website, which is available to all ACA members.

Viney also regularly presents forums on the topic and he believes that it’s time to change the conversation about the way we approach fee calculation.

“The intent is not to tell people what to charge, but to start architects thinking about how to charge,” he says.

The first thing he notes is that fee scales may not be the best way to go about it.

How do I determine my break-even point?

At his presentations, Viney often notes the sad fact that over 80% of firms do not know their break-even point. If your firm is one of them, before you do anything else, you need to break down your overhead costs and ensure you have an accurate view of what they are. Once you have calculated your actual costs, then you can look at working out what to charge your clients.

The list in Table 1 is an example that will help you get started, and you can add other items as appropriate. 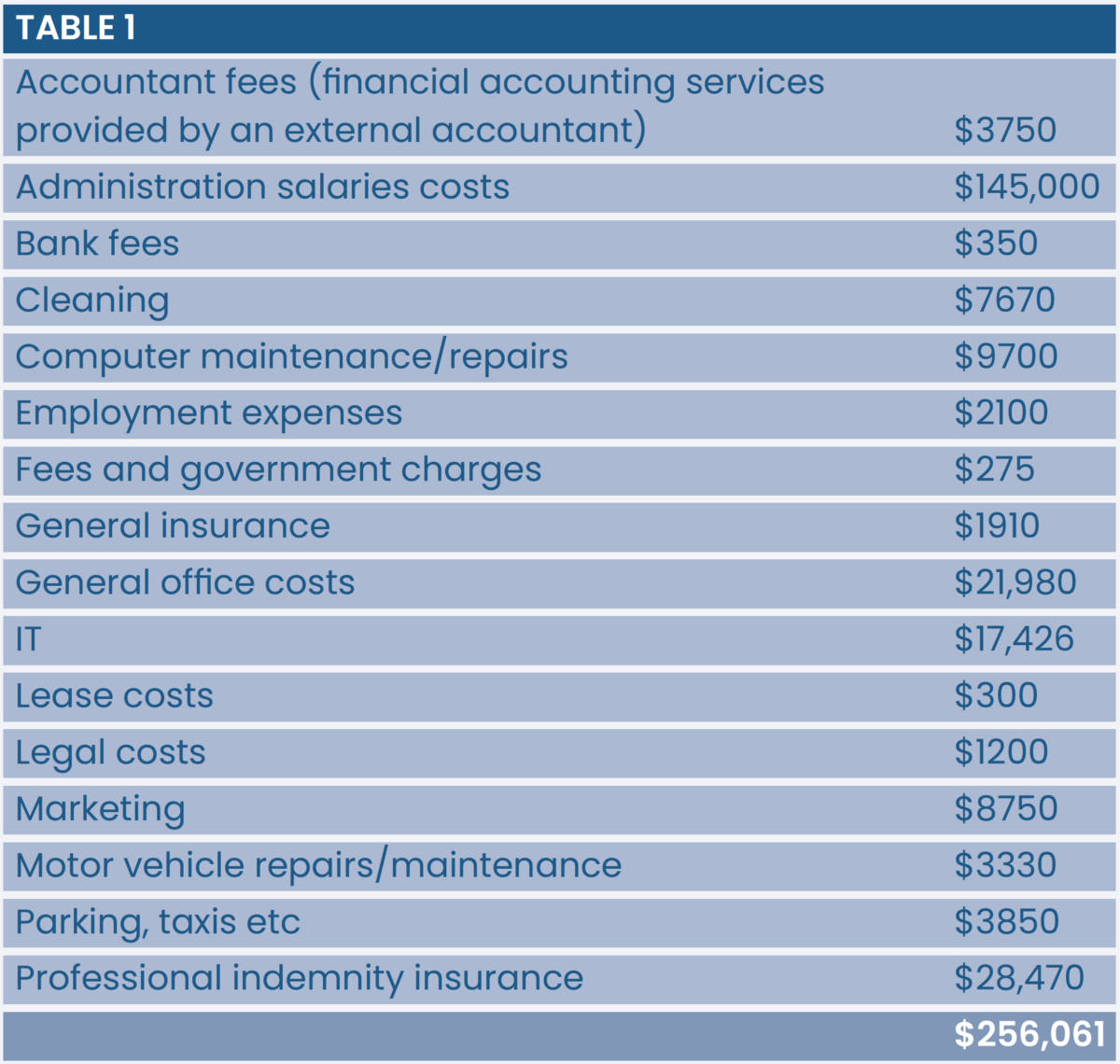 What frequently happens is that practices don’t record their hours properly, says Viney. Based on ACA surveys, fewer than 30% of firms have a practice management system. The result is a culture of long hours, and unpaid time leads to underpaid staff. This can be compounded when interns are used illegally for commercial gain. The knock-on effect of all of this is that fees are low-balled to match. In the last salary survey, it was revealed that 14% of practices are actually responsible for wage theft, because they are paying under the award.

A way to avoid this is to properly work out the costs related to all parts of the practice. Calculate a real profit margin based on the hours it will take to undertake the project and charge appropriate fees.

Version three of the calculator enables firms to anonymously compare overheads on a staff pro rata basis to firms of a similar size. The ACA has also developed a Salary Calculator to enable practices to understand their obligations under the award.

Determine the costs of non-billable staff

This is fairly straightforward – it’s the staff in the office that are non-technical. This is your administrative staff, marketing staff, accounting staff, office manager etc. It’s anyone who is an overhead rather than a direct earner of income for the practice.

Determine the percentage of non-billable hours for billable staff

These are the hours on timesheets often referred to as ‘other’. Unlike, say, a plumber, where they’ll charge their full 38 hours of the week, most architectural practices have obligations other than simply their project work. It could be CPD (continuing professional development), a quality assurance system and a range of tasks and responsibilities that the architects need to complete that cannot be billed out to a client.

If the non-billable hours are not specifically allowed, they can equal or exceed the allowed profit margin resulting in a loss from the start of the project.
The calculator requires each practice to adjust a series of variables that are particular to that business, resulting in a unique calculation for each practice.

The following template can be used as an example:

Determine the number of billable hours available to the practice

The billable hours are defined by how many hours staff are being asked to work. The baseline – the award – is 38 hours, but many practices ask their staff to work more hours than that? “We ask people to calculate their billable hours and we give them an indication of what they might use on the assumption of four weeks leave and two weeks of personal leave and/or public holidays,” says Viney.

“It’s primarily about how many hours a week they are asking their staff to work.”

If you’re working just the base hours it’s 38, so the cost of overheads per hour is higher. But if the staff are being required to work longer hours, say 42 hours, then this results in a reduction in the hourly rate calculation.

Practices also need to take this into account in ensuring they are paying staff above the minimum award.

“The simple process that has been traditionally used is a multiplier where practices calculate their hourly rate by using an often arbitrary rate of between two and two and a half against the hourly salary cost to cover overheads and profit. The calculator takes a different approach where it amortises actual overheads cost against billable hours, which we believe is a more accurate reflection of the real costs to run the business,” says Viney.

“It’s like a see-saw. The cost of an overhead is actually the same per person, irrespective of whether you’re a director or a graduate, because the cost of the rent, the PI (professional indemnity) insurance and the cost of the technology doesn’t change.”

Viney says the problem with using a multiplier is that it exaggerates the overheads at the upper level, even though practices don’t get to charge many hours from directors. But if they put the same rate across the board in the practice, it increases the charge out base rate, where the majority of the time is charged.

“So, it changes the see-saw to one where you have a less pretentious hourly rate at the top end and a more realistic one at the bottom end.”
Perspective is important, says Viney.

“If you look like you’re charging like a lawyer and have high hourly rates, some clients get really concerned. So, for example, based on a multiplier, I may charge $350 for a director and $70 for a graduate, but using the calculator and equally applying overheads it may result in rates changing to $250 for a director and $100 for a graduate, but I’ve got a lot more billable hours at graduate level, so I’m actually picking up a lot more on my overheads through the junior staff, rather than relying upon the lesser hours of the directors/senior staff. It’s quite a different way of calculating fees than used by the majority of the firms,” he concludes.

Part two of Calculating Fees will look at how to determine appropriate fees to charge clients.

This article was originally published in AR and has been republished with permission.