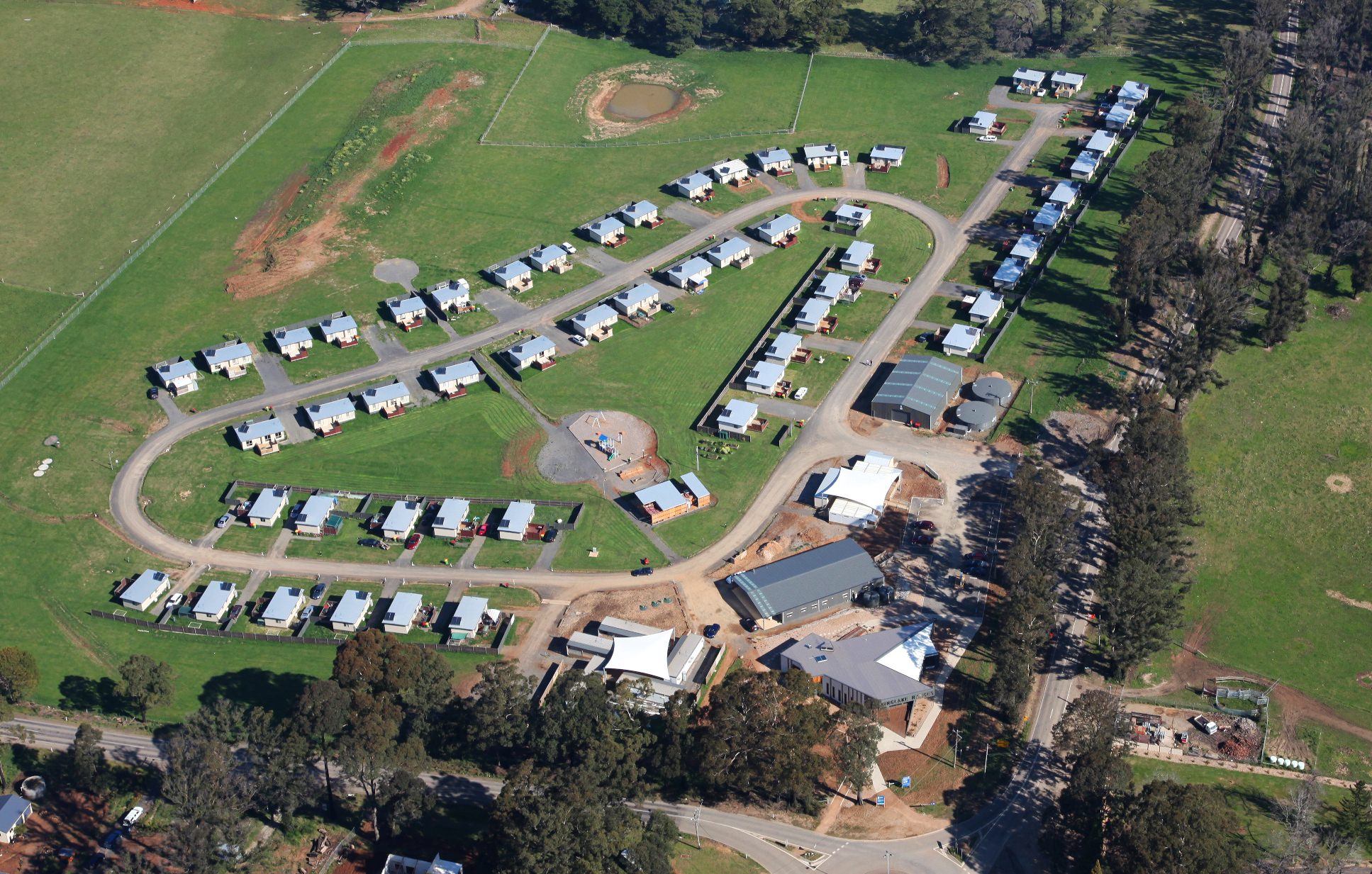 Peter Johns recalls the project to provide temporary housing at Kinglake following the 2009 Black Saturday bushfires, and reflects on lessons learned and how the profession might be effectively involved in the current recovery.

When and how did you get involved in bushfire recovery projects? Did you do this work through particular groups or organisations?

I was approached the month after the fires on 7 February 2009 by the Victorian representatives of Emergency Architects (EAA), as I’d had previous pro bono experience with one of them. In 2006 I’d helped set up the pro bono arm at Architects for Peace so was aware of the issues. EAA had been put forward to the Victorian Bushfire Reconstruction and Recovery Authority (VBRRA) by the Australian Institute of Architects, from a long list of architects wanting to contribute services.

Several friends had been caught up in Black Saturday, and I’d heard their horror stories. The intensity of the disaster and its proximity to Melbourne meant that many friends were throwing up their hands to offer their services. There was no analysis of what this might mean financially, only an awareness of the urgency. 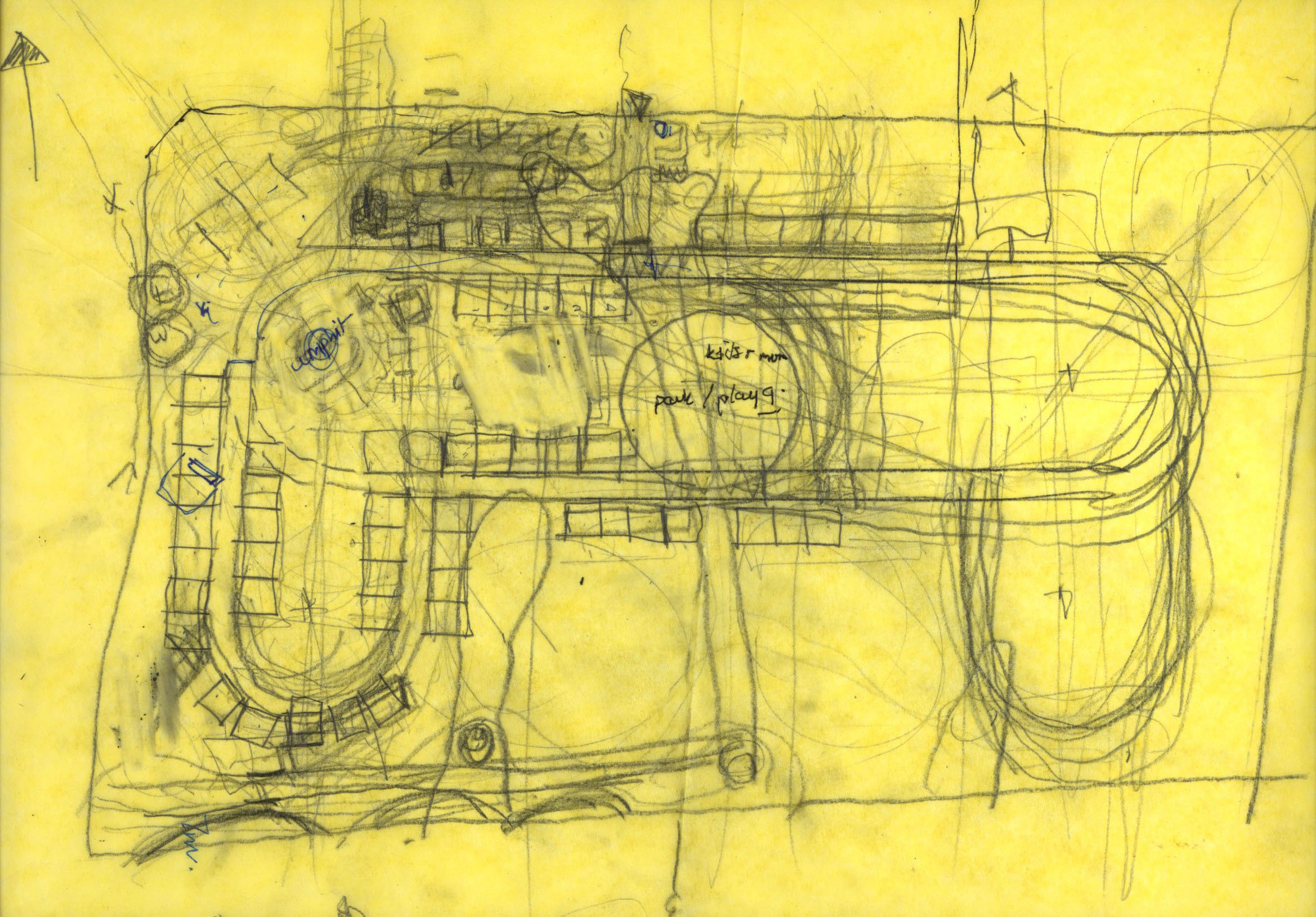 What particular projects did you work on? What did these involve?

We worked on the temporary housing village at Kinglake. The village, and two others like it, were to provide housing for displaced residents for up to two years. It was felt to be important to give people the opportunity to live within a supporting local community during the repair and rebuild, rather than find temporary accommodation out of town. But it was also thought that this approach would be cheaper, safer and quicker than assisting directly on everyone’s sites, many of which had been disconnected from services.

Late in March we were asked to plan roads, sites and services for 50 two-room flat packs that had been designed in 1982. We were asked to “make it pretty” and I remember a lip-sticked pig flashing in front of my eyes. The flat packs would be starting to arrive in less than a month. There were also four ‘dongas’ headed our way – long shipping containers kitted out for single people. After two years, everything was to be removed without a trace.

There was little or no community input in the early days. The hastily convened VBRRA was militaristic in structure and culture, wisdom flowing from the top-down, with a mandate to bypass planning and building codes where necessary. I saw part of our role being to cushion some of the hard edges of such a project, to find opportunities for good design that might make a difference to the community without adding cost.

The site’s lease conditions meant that we had to plan for all rainwater, stormwater and sewerage systems to stay “above the ground”, to preserve the land owner’s nearby spring. This led to a lot of intense research and heavily influenced the new site plans, which worked closely with the site’s contours.

After several design meetings and much yellow trace, we submitted our plans, but the brief was already out of date. At the time the community was a bit suspicious of the village and few were keen on living there. This meant the number of houses reduced to 24, and the size of the leased site halved.

The lower numbers also meant that the green measures wouldn’t “break even”. So, just as the roads were being formed we found out that the lease had been renegotiated to allow for septic fields and stormwater. We had to drop all the work on overland vegetated swales and containerised membrane bio-reactors and proceed on. Abortive work and surprise changes are the nature of this game and aren’t something to grumble about, but you do have to be more elastic than on a traditional job.

We were concerned that a dense cluster of small two-bedroom boxes was not the right solution for distressed Kinglake families used to being separated on big blocks. We spread them out and oriented each house so that it had either good sunlight or a good view, hopefully both. Each had fenced side yards and a generous backyard with space for dog runs. We extended the front door stoops into large screened decks. Extra space could be added to houses by rolling a caravan up to the deck. We were basically looking for any opportunity to improve conditions for our unseen and unknown clients. We made many other suggestions. Some were acted upon and others weren’t – I particularly regretted not getting the colour schemes and landscape designs over the line.

After the first community consultation session, numbers interested in the village rose and we had to add new wings to the plans, and generally increase density. Our final village design had 41 houses, along with the four dongas, a community centre, a large storage shed, a playground and a barbecue shelter. After our departure, another 15 houses were squeezed in. The sustainability measures we’d had to dump would have paid their way easily. 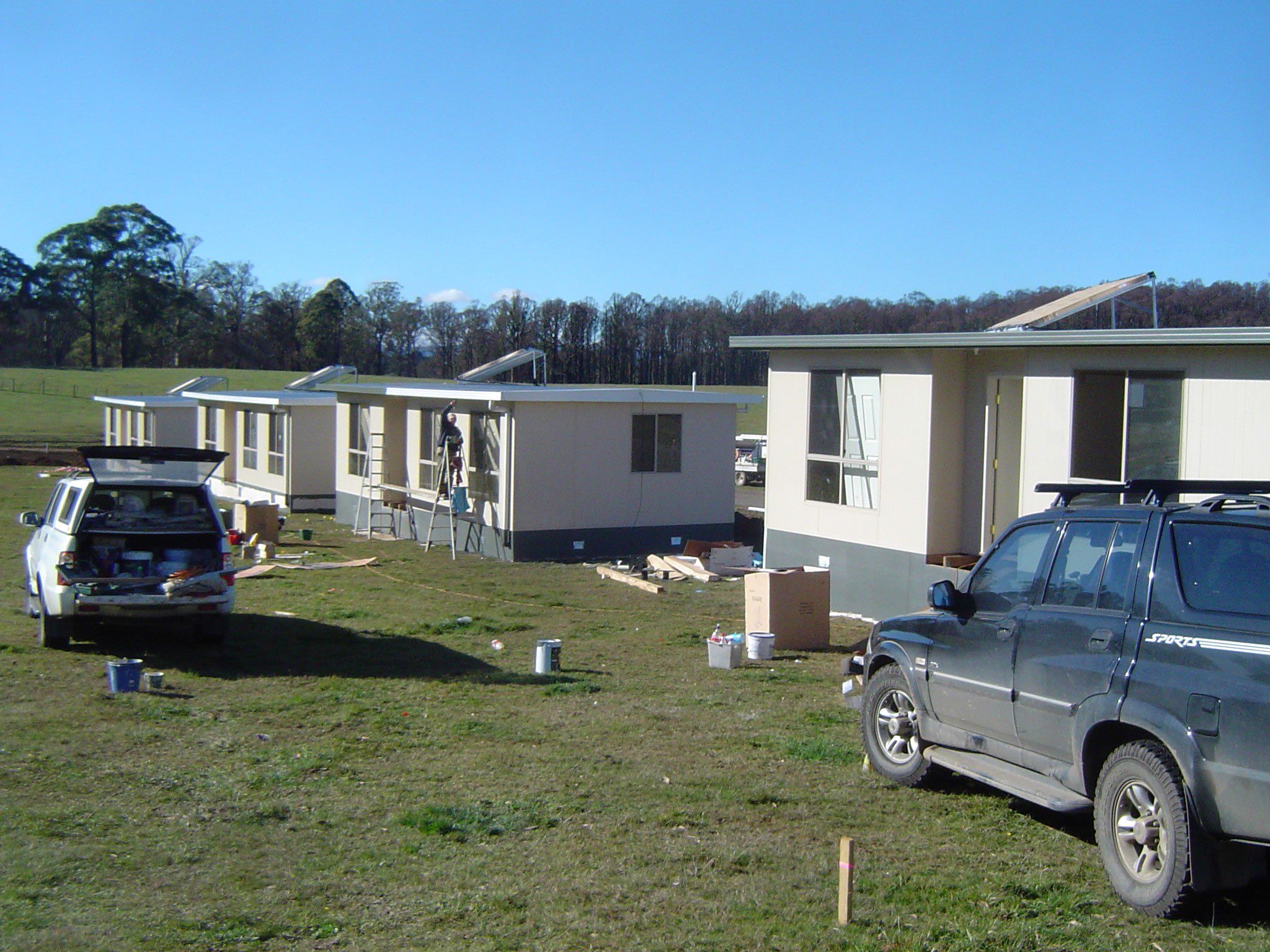 What kind of procurement model / contracts were involved? Was the work done pro bono?

A joint venture was formed between several architectural practices, under the EAA name, and a “$1” pro-bono contract was drafted for us by Freehills.

Apart from some early surveying work, all the other consultants were being paid, though some gave discounts. This didn’t cause any major resentment. They tended to be locals and knew what they were on about, so we got on well with them.

I wasn’t aware until recently that $11 million for “essential services in temporary housing villages” came from the $409 million Victorian Bushfire Appeals Fund – the money donated by the public. I’ve no idea how this money was spent at Kinglake.

All the buildings in the village and many of the other materials were donated to the project.

If the projects were pro bono, how did you balance this to ensure the financial security of your practice?

We agreed with the VBRRA that our total time across all partners in the JV would be capped at 150 hours, which everyone thought was sustainable. By late May we had well exceeded this, and the EAA president reported this to the VBRRA. We were told we could leave now if we wanted to.

The contract, which hadn’t yet been signed by the client, went into a sort of limbo and wasn’t mentioned again. We felt that we couldn’t leave as our work wasn’t done. There were people relying on us for coordination and drawings. We were still working on the project in October – it had a long tail.

We were standing on the site on the very first day when I asked if travel costs could be reimbursed. The reply was a curt “no”. There would be no reimbursements of any kind, and if we were unhappy with that, they’d call the Institute’s Victorian president and get another architect. There was a long queue wanting to work for nothing, we were told. I remember thinking then that we’d devalued ourselves, but what we’d struck was a culture clash. The project manager obviously had a lot of pressure on him, was from the army, and had never used an architect before. Lucky for us, his second-in-command was an architect, and a great go-between, so really helped smooth the processes.

While donations to the government’s bushfire appeals were tax-deductible, donations of skill and labour were not. Even requests to cover travel and disbursements were knocked back. I wasn’t in it for profit or profile, but I wasn’t expecting some of the costs. In the end EAA reimbursed our travel costs directly from its own funds.

We finally left when the builder took over the project, several months later. By that time I’d worked 130 hours. I guess the larger practices were able to spread the loss of time and fees better than the small. My co-directors at Antarctica were right behind me from the outset, but as we edged towards the red in May, I tried to limit Kinglake work to the evenings. 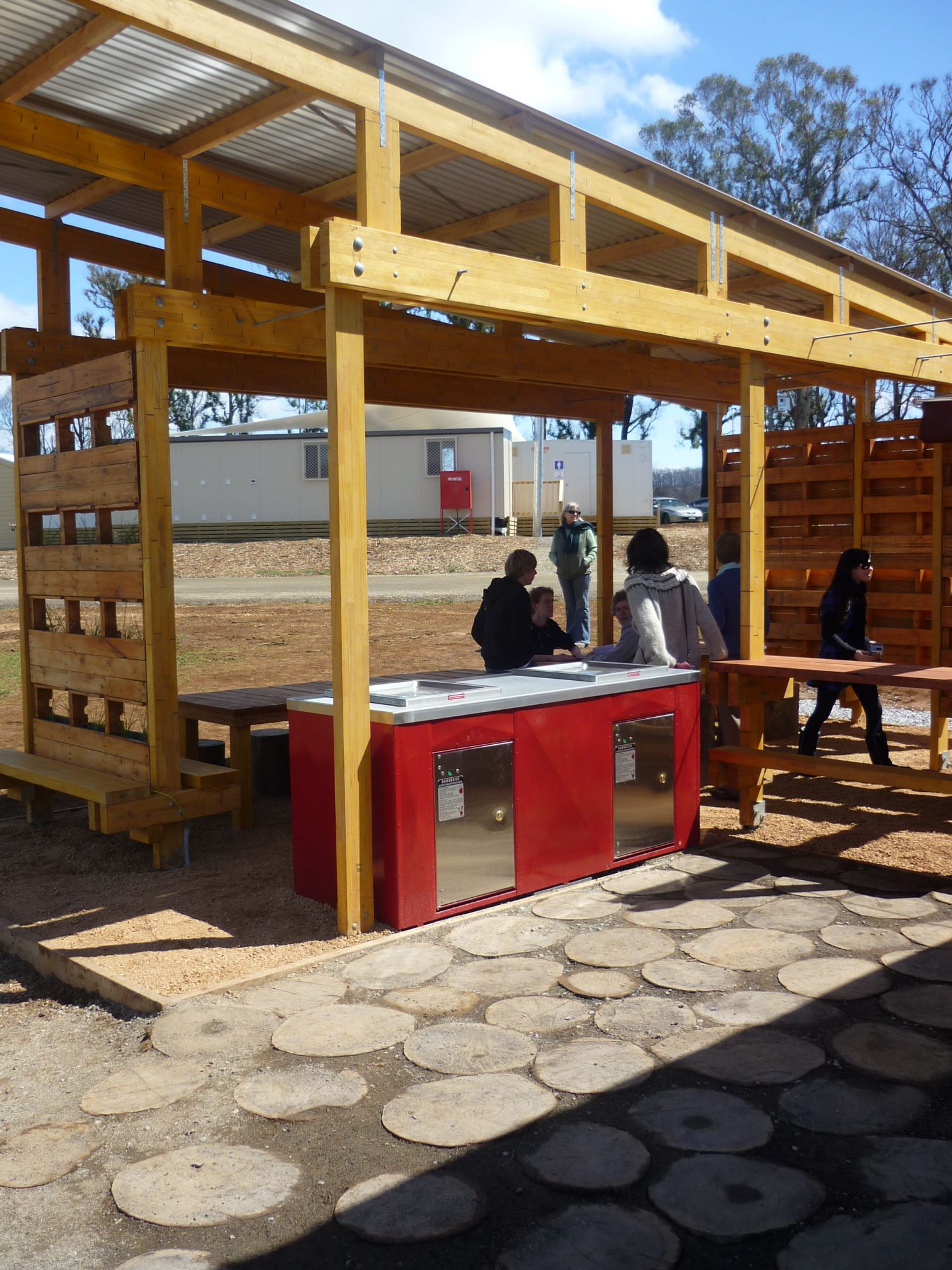 What are the key lessons you have learned that are relevant to the bushfire crisis and response today? What advice would you give to others who are keen to get involved?

I wouldn’t work pro bono for government again. Having been twice bitten I’ll leave it to others. The concept of pro bono publico can be easily misinterpreted by the public service – you might be assumed to be some kind of faker with a hidden agenda to dig for work, money or profile. Attempts to work for the “community” often end up with a level of government as your real client.

Post-occupancy evaluation of both the processes and the product would have helped build understanding about what is effective in disaster recovery contexts. It would be good to see professional bodies better support architectural practices with guidance on pro bono work, advocacy to government on the procurement of architects in a disaster, as well as the importance of early community consultation.

Bigger companies are the least-impacted by taking on this sort of work, but from my experience they don’t, for the most part, have the will unless someone near the top of the pecking order has a passion for it.

For smaller practices, joint ventures are the way to go. Despite advice from the Bushfire Support Roundtable in March that one architect per village would be sufficient, we had a core three that extended to many more at times. It’s good not just in terms of splitting the workload, but for emotional support and debate.

The outlook isn’t rosy. Bushfire events are only going to increase in frequency. Kinglake now has 40% more residents than it did then. I think architects need to look at the army reserve system and other ways of ensuring that there is a standing body of skilled architects ready to act when the need arises.

There are other pro bono models our discipline could learn from. The 1+ organisation in the USA is a pledge-based matching system, with firms asked to donate 1% of their time to pro bono projects, or Justice Connect in Australia.

On this front, things are moving the wrong way. EAA closed a couple of years after the fires, followed by Architects for Humanity, and Architects for Peace’s pro bono matching service, the latter for lack of interest. What has changed for the better is the growing number of courses on humanitarian and disaster response architecture being taught in universities, for instance MoDDD at RMIT.

I can’t help thinking that architects in these calamities would have more sway and be better valued if they were working in a paid capacity. On this project, we didn’t displace paid architects. There simply wouldn’t have been any. I felt we were making a case for designers on the front line, and I hope we succeeded.

Peter Johns is a former architect and now full-time web developer. He has written for the architectural blog butterpaper.com since it began in 2000.