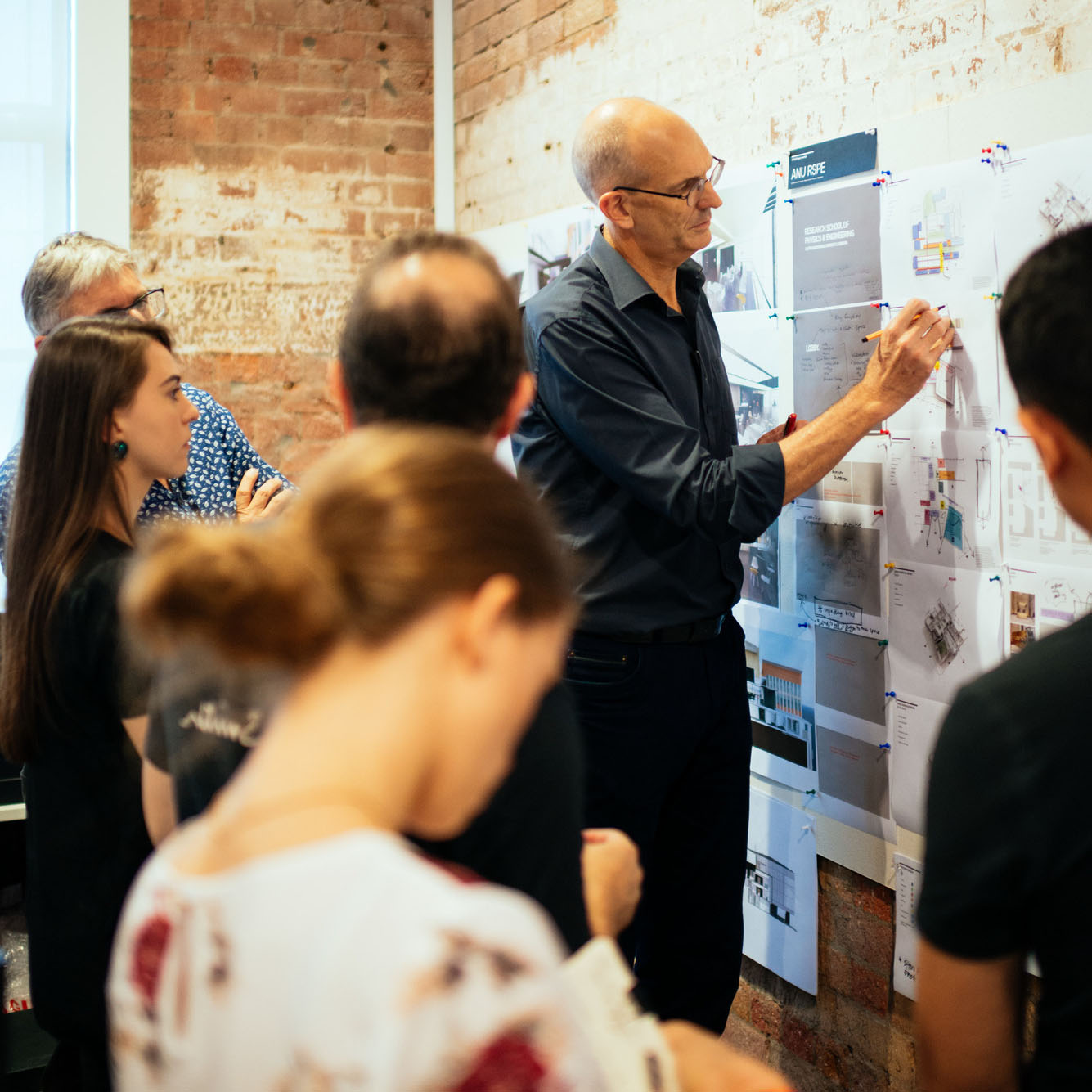 Emerging from a survey of graduates in 2021, the mentoring program running in the Hassell Brisbane studio has encouraged new relationships and collaborations within the practice, building different knowledge, experiences and networks. The People Coach program is another new initiative, which is available to all staff globally.

Why did your practice set up a mentoring program?

We decided to conduct a survey with our younger staff cohort in Brisbane to better understand their priorities. Around 50% of the people who responded to the survey said they’d find a mentoring program really beneficial for their professional development. So, that was the impetus for developing a mentoring program in our Brisbane studio.

When did you start, and how many people have been mentored since the commencement date?

The Brisbane studio mentoring program kicked off for us in November 2021. It was a voluntary program. We had around 35 mentees across our disciplines, from architecture, interior design, landscape architecture and our BIM team. Initially, we approached about 25 people, but a few others came to us and said they’d like to be a part of it too. They were in the cohort of 5 to 10 years out of university. So, we expanded the program to about 35 people.

We had about 15 to 20 mentors, with some being paired with two mentees. We decided to give the mentees a couple of options, so they could choose who they’d like to build that mentorship with. Overall, it was an overwhelmingly positive experience, with over 90% of participants stating they learned something from this mentoring journey.

We did a pilot, which was planned as a six-month process. Within that, we set up an introductory session in November 2021, followed by four sessions for January, February, March, and April. It culminated in July. One of our collaborators, Mott MacDonald, had a similar program, so we invited them to our office for a celebration event. It was a chance for our mentees to meet them, share their experiences of the respective mentoring programs, and start a networking process.

How does your mentoring program work?

The mentoring program was deliberately organic. We didn’t say, “you will do this, you will do that, and here are some KPIs, and you’ve got to write a report at the end of it”. Rather, there was freedom between the mentee and mentor to structure the mentoring in a way that suits them both.

We encouraged the mentees to take ownership of it. We made it clear that we didn’t expect the mentors to drive it. We would set up the program, but then we wanted the mentees to be responsible for the ongoing catch-ups – to determine the best times to meet and establish what they wanted out of the program. Is it goal setting? Career advice? Is it to discuss next steps of what’s coming up in their projects or professional career?

Another important thing we did was to try and separate the mentees and mentoring process from their team leaders and projects they were working on. We tried to find a mentor who was independent in the studio, who they might not necessarily have worked with previously. It was an opportunity for mentees to get to understand and know that person better in terms of networking with someone beyond their current discipline or their role within Hassell. This has been beneficial, particularly for some graduates who were one or two years out and were purely in project work with the same team. It helped to increase their network and develop relationships with others in the studio.

The nice thing about the program was that everyone got behind it. When the mentors/mentees met for the first time, the leadership team shouted the first round of coffee. That small gesture made a huge difference. As a studio, everyone was committed to seeing this happen and getting some positive outcomes out of it.

Since then, we have also implemented a new program within the practice called the People Coach program, which is open to all staff. Everyone at Hassell is now paired with a People Coach, who is a consistent leader that they can talk to about their career aspirations, goals and professional development generally. The concept stemmed from the observation that design professionals move from project to project and do not always have a consistent leader to talk to in relation to their career aspirations. The role of a People Coach is to help us better support our people with developing and growing their careers including conversations about career aspirations, performance goals, development planning, actions they could take, and support they need from leaders.

A People Coach is an additional person to talk with about development and career plan aspirations. Coaching is about supporting someone to develop awareness and find solutions to manage their day-to-day working life and future growth potential. It’s about helping them come to their own conclusions rather than giving directions.

This is different to our Brisbane studio mentoring program with slightly different objectives, but this is a unique program that Hassell has since developed to further enhance the employee experience at Hassell.

What are the benefits of the program for individuals and the practice?

We prioritise people’s professional development. We invest in our staff. People are our number one asset, and we want them to be here long term. By offering programs such as the mentoring program and by extension the People Coach Program, we’d like to think that this is something that compares favourably to what our competitors may or may not be doing. I think it demonstrates to the younger cohort that when we do these surveys, we listen to them and take action.

And then, for the actual participants themselves, the mentees, it is an opportunity to mix with others in the studio. We have a big studio in Brisbane. We have over 120 people. The mentees are getting to meet and collaborate with others who are more senior in practice or from another discipline altogether. We really try to cross-pollinate the disciplines. It is a chance for mentees to strengthen those relationships and appreciate different design disciplines. It also was about hearing different perspectives and learning and developing through more experienced professionals The mentors have found it to be quite a fruitful exercise as well. They’ve enjoyed the process of upskilling in that area, as they become future leaders of the practice.

With the People Coach program, it is about: facilitating conversations around career aspirations, goal setting and development planning; helping unpack issues or explore ideas; being a sounding board for feedback received from leaders or team members; helping identify the right project leaders or Principals who could help grow experience and career; and advocating for the person around career and project opportunities.
Overall, both programs help to create a feedback-rick culture where people can belong, grow their careers and excel within Hassell.

What are the challenges of the program and how have you addressed these?

A lot of time went into lining up the mentees with mentors. The pairing process was like a giant matchmaking exercise, and it took several weeks to get this right. We had this huge spreadsheet and would return to the mentees several times through the process.

It’s not just a conversation between two or three people. You need to speak to others who might know that person a little bit better to understand what they’re like, how they operate, and the way they think. Getting the right alignment is important so everyone gets the best value out of the process. There’s no point getting two people together who aren’t going to click. So, a lot of effort went into that. Similarly for the People Coach program, we have spent a lot of time in the matchmaking process globally.

Who is the program for and would you open it up fully to all practitioners in the practice?

Initially, the Brisbane Studio’s mentoring program came from our Emerging Designers Collective, which we’ve had running for a few years. This group provides opportunities for emerging designers to be part of a network, to be mentored, to learn skillsets and gain career advice, and to look for opportunities for professional development. We encourage those in the group to come to networking events or out to building sites to talk to contractors and have a sense of appreciation about what happens on the building sites, as opposed to being at the desk, documenting or designing all day. It is about giving them more exposure to what actually happens as they get further into their career, and what they can look forward to and come to expect.

Initially, we rolled the Brisbane studio mentoring program out to the emerging designers, but then a few more senior members of staff wanted to be involved as well. Hassell’s People & Culture function have since rolled out the People Coach program, which is available to all staff globally.

What advice would you share with another practice who is about to set up their own mentoring program?

I’d encourage other practices to invest in a mentoring program, but it’s essential to have faith in it. It is hard work. It took us a few months leading up to it before we launched the program. A few times along the way we heard people say, “We’ve tried this before. It doesn’t work.” But it’s important to listen to your staff and show that everyone has a voice and respect that and do your best to try and see it through. It’s been worthwhile for us – and we’ve got a lot of happy mentees that have come out of this program who are keen to maintain these relationships.

The value-add is key. The world has changed quite significantly in the last two and a half years. Having a great wage is just one thing. Embracing things like hybrid working, showing that the care is there, having mentoring programs – all these things are even more critical now. If staff are working from home, they need to feel they can reach out and talk if they are having a tough time or just looking for advice on their next career move. I think the more that we can learn from each other, the better.