What Makes a City? 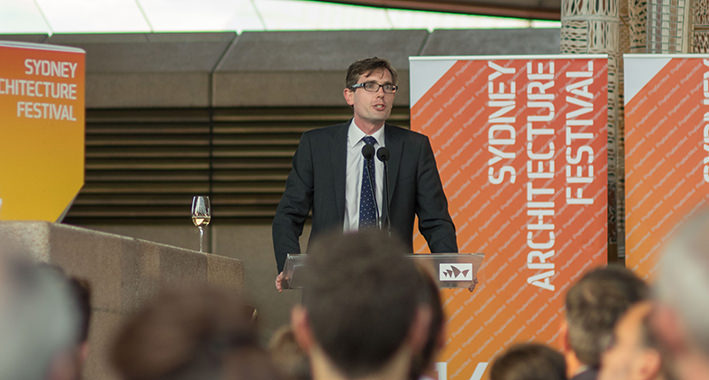 The Hon Dominic Perrottet MP, NSW Minister for Finance and Services, launched the Sydney Architecture Festival with an impressive speech about the role of architects in the making of innovative cities.

Thank you, Tim, for that introduction and good evening to you all. It gives me great pleasure to welcome you to the launch of the Sydney Architecture Festival for 2014.

And what a remarkable venue this is for tonight’s event. The Sydney Opera House is the work of fine Danish architect, Jorn Utzon, just over 40 years ago. I’m told the concrete in the northern foyer is famous for how its Italian crew took matters in to their own hands – stripping the formwork before it was cured, and hand finishing the surface to a lustrous sheen – in an old technique almost lost until only a few years ago.

This story of tradition and skill combines with one of high-tech capability in Ralph Symonds, the remarkable Sydney entrepreneur and innovator, who worked with Utzon to develop the technology behind the bent plywood panels seen throughout the building.

We stand in an exemplar of how architecture fuses tradition and technology.

As Finance Minister it would be remiss of me not to note Deloitte’s valuation of this piece of treasured Sydney real estate – its cultural and iconic value is assessed at around $4.6bn. It really is one of the world’s great and enduring examples of architecture whose value can be measured.

But let’s not forget where architecture started in Australia. From this very spot you can almost see the work of our first architect, Francis Greenway. Greenway’s rum hospital on Macquarie Street was soon appropriated to become the colony’s first Parliament building. (Some argue the behaviour hasn’t changed in the days since…)

Greenway made the leap from forger to being appointed NSW Government Architect by Governor Lachlan Macquarie 198 years ago. I’ve always thought it funny that a forger was chosen to appear on a bank note – Greenway was, of course, the man on the $10 note until 1993.

From where we stand I can also see the AMP site at Circular Quay. This was the first tower in Sydney to exceed the 150-feet height limit – a limit set in 1912 – and is a reminder that some rules are there to be broken.

In the remaining time, I’d like to sketch a few thoughts on the role of architecture in urban growth and urban renewal.

NSW is number one in growth at a time when all growth is welcomed, but good growth is especially welcome. Commsec’s most recent quarterly “State of the States” report put housing at the centre of NSW economic resurgence, noting that housing starts are 36% above the decade average. Much of this housing is medium-density – a form of housing I know is dear to the heart of every architect.

Our ambitious infrastructure projects are also paying dividends for the state’s economy – even though most of our unprecedented investment in infrastructure is yet to come. (This will be discussed further at the “Growing a greater Sydney” colloquium in Parramatta on 7 November.) Some of you are already working with us to get the most from WestConnex, or the North West Rail link, and the return of light rail to the city, thanks to the leadership of my colleague, Gladys Berejiklian

Returning to growth in NSW is something that benefits us all. But growth alone is not enough. Here I would like to echo the words of Joe Agius, President of the NSW Chapter of the Australian Institute of Architects. The challenge we share is to ensure that, as Sydney grows, it is not just a question of bigger and bigger, but of how we plan to grow bigger and BETTER.

Achieving the growth we all want is the work of planning, design and engineering professionals, financiers, policy-makers and many others.

Last Friday, my cabinet colleague Rob Stokes spoke to the Planning Institute noting that, “planning design can influence energy demand, supply and use”.

This interest is not exclusive to planning or environment. As Minister for Finance, I know that waste matters. Whether that waste is the avoidable energy we use in poorly designed homes or in centralized infrastructure, which is being disrupted by distributed networks, fuelled by the new economy.

The new economy is no longer a theory. Just as car share schemes represent new ways for infrastructure to be shared, we know that innovation in the built environment will emerge to help us grow in smarter ways.

I’m confident we will see this in the work of Urban Growth NSW in Newcastle and North Ryde, Parramatta North and other urban transformation precincts including The Bays Precinct.

I’m interested in how urban growth can be a means to grow the human and natural capital as much as financial capital of NSW.

Cities represent an important investment in our future. But it’s been said we are facing twenty-first century challenges with nineteenth-century tools. To be a great global city we need new ways to work better together. Is there any more critical need than to join up and connect the good people and great things underway in our emerald city?

This is why I was thrilled to see the theme of this year’s Sydney Architecture Festival – Connections: the making of a great city.

And it is why, on 3 June this year, the Premier announced a new Greater Sydney Commission to broker the connections needed to discover, design and deliver what Sydney needs to be an even greater city.

It’s not enough to dig or develop. We must ask – for what purpose, and for whose benefit?

If planning is about laying out the conditions for the right development, architecture is about getting this development right. As minister responsible for the state finances, my interest is in making sure we invest intelligently in the long-term potential of places that last.

I mentioned NSW’s record housing starts. These figures are encouraging, but they are only one measure.

It’s not enough to count houses if these houses put families on the fringe where our infrastructure cannot support them.

That is why we’re preparing a metro strategy that gives people more choice to live within reach of green open space, public transport and local jobs.

It’s not enough to provide choice in the market if the townhouses, apartments and terraces are not designed for how and where we want to live.

That is why we’ve updated the State Environmental Planning Policy (SEPP 65) to safeguard quality in design and recognise those who do it best – our architects. You.

It’s not enough to talk about social networks and social change if we aren’t engaging people in designing that change.

That is why I welcome a Sydney Architecture Festival that engages beyond the professions and institutes, beyond the boards and committees of those involved in the field, to those who experience it first hand.

I congratulate you for your ‘Architecture on Show’ program, which takes architecture out of the studio and into the libraries and civic halls of local communities. And I’m pleased to see the festival teaming up with the good people at Sydney Open to throw open the doors on buildings and sites from our past, our present and – with the Augmented Australia show at Customs House – even the future.

For me, architecture is one of those sectors that doesn’t just trade value, but creates it. And – because you imagine, make and deliver – you invent our future.

David Bowie once said that tomorrow belongs to those that hear it coming. Few hear it coming better that those who imagine, design and build it.

Artists, makers, designers, architects – those who scribe the culture of their place in the technology of their time – are the first to see what others fear is impossible. They hear tomorrow coming.

Just like the relationship between Jorn Utzon and Ralph Symonds in this place, architects and manufacturers must work together to invent new, home-grown enterprises that go on to service global markets.

Contemporary architecture can be a catalyst for innovation in those products, materials and technologies that we choose to integrate in the housing, workplaces and cultural buildings that form our built environment.

I’m intrigued by the idea that innovative architecture can invent new products, or give a new life to those things we thought we knew.

Like Frank Gehry’s new building for UTS – another Sydney example of architects working with a manufacturer (Austral Bricks) and the contractor to reinvent the Sydney brick for the new century.

I am intrigued by how architects might play a role lifting trades and suppliers up the value chain and making them more competitive in domestic and global export.

My request of this Sydney Architecture Festival is for you to provide me with the evidence of how and where architecture does this.

I’m very pleased to join you for the launch of the 2014 Sydney Architecture Festival. I look forward to hearing reports on its success and wish you a great week of events.

Hon Dominic Perrottet MP is the NSW Minister for Finance and Services. This is an edited version of the speech made at the launch of the Sydney Architecture Festival on Friday, 31 October.

The event was organised by Tim Horton, registrar of the ARB, in conjunction with the NSW Chapter of the Australian Institute of Architects and the Sydney Architecture Festival