The findings of the 2017 National Salary Survey, with analysis by Dr Gill Matthewson, are now out – salaries are up very slightly, but worrying trends continue for the third year. There is still a gender pay gap and some practices persist in paying under Award minimums!

The report by Dr Gill Matthewson outlines the broad trends identified this year and compares these to the results from previous surveys. The full report is published in the members’ section below and is available to ACA members. Dr Matthewson’s reports on surveys from 2016, 2015, 2014 and 2013 are also available. A summary of the findings follows, and members can also download the full report.

The 2017 survey had a slight increase in the number of respondents from last year, and this resulted in an increase of 17% more staff covered. Once again staff numbers were skewed towards larger practices, with staff numbers dominated by the large firms – this year nearly 60% of the staff surveyed were located in 50+ firms.

Over the years, the greatest increase in responses has come from medium-sized firms, with substantially more firms in the 10 to 29 size bracket than in 2015. This would seem to belie the widespread assumption that mid-size practices are disappearing from the profession.

Of the respondent firms, the majority (55%) had increased salaries by the CPI or less than 3%. This is similar to 2016 (and 2015), but this year more practices have complied with CPI and fewer are in the ‘less than 3%’ category. The number of firms who had raised salaries by more than 6% also increased slightly – from 15% in 2016 to 18% this year. Two percent of the firms reported increases of over 20%.

Salaries tend to increase within each category according to practice size – with larger practices paying more.

Over the years of the survey, the proportion of responding firms offering benefits to all staff has also increased, while the proportion of those offering no benefits has decreased (from 38% in 2015 to 31% in 2017). The type of benefits offered is also revealing – this year only two of the firms acknowledged support for registration as a benefit, and more practices offered gym membership than membership of the Australian Institute of Architects. This lack of professional support is rather surprising. 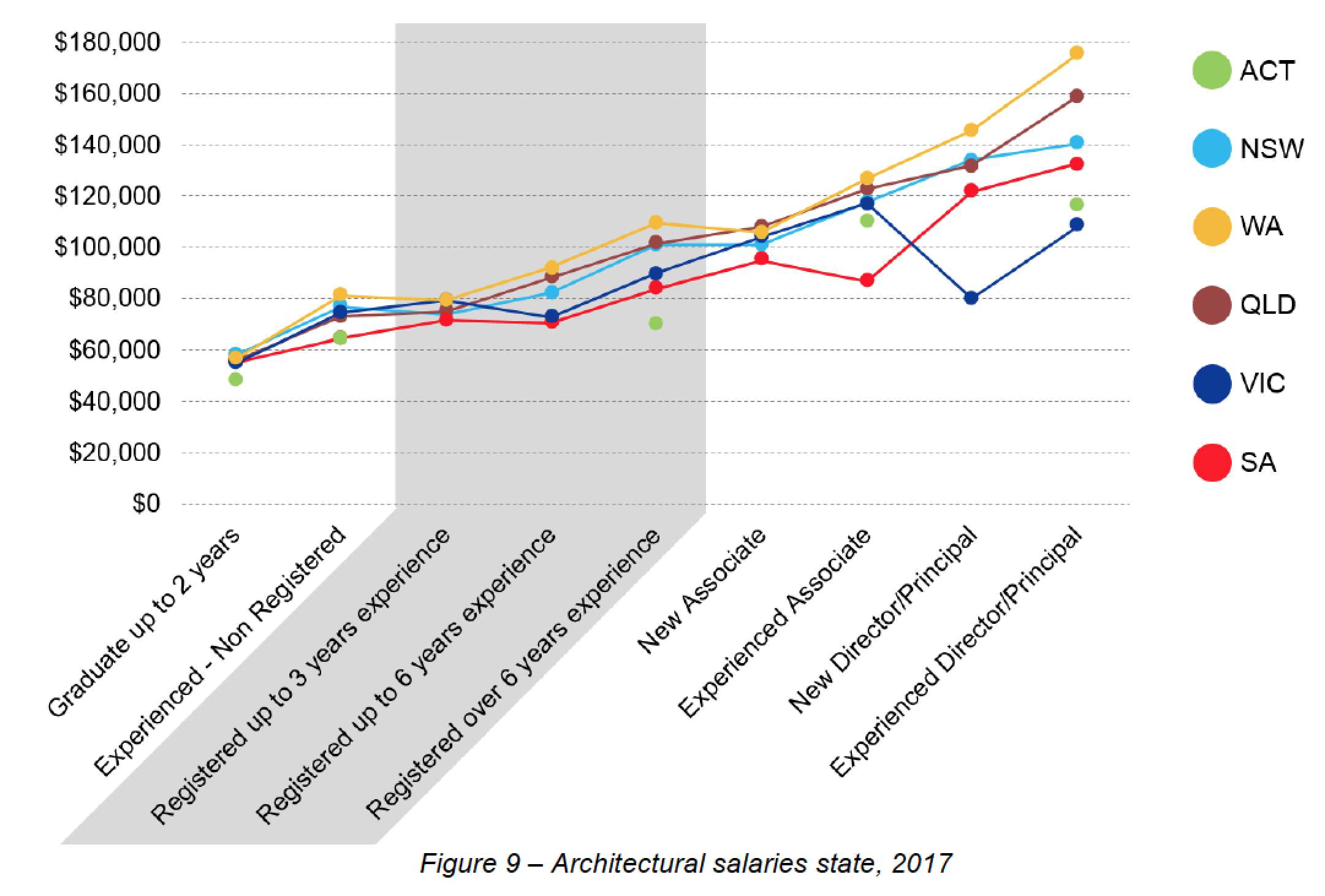 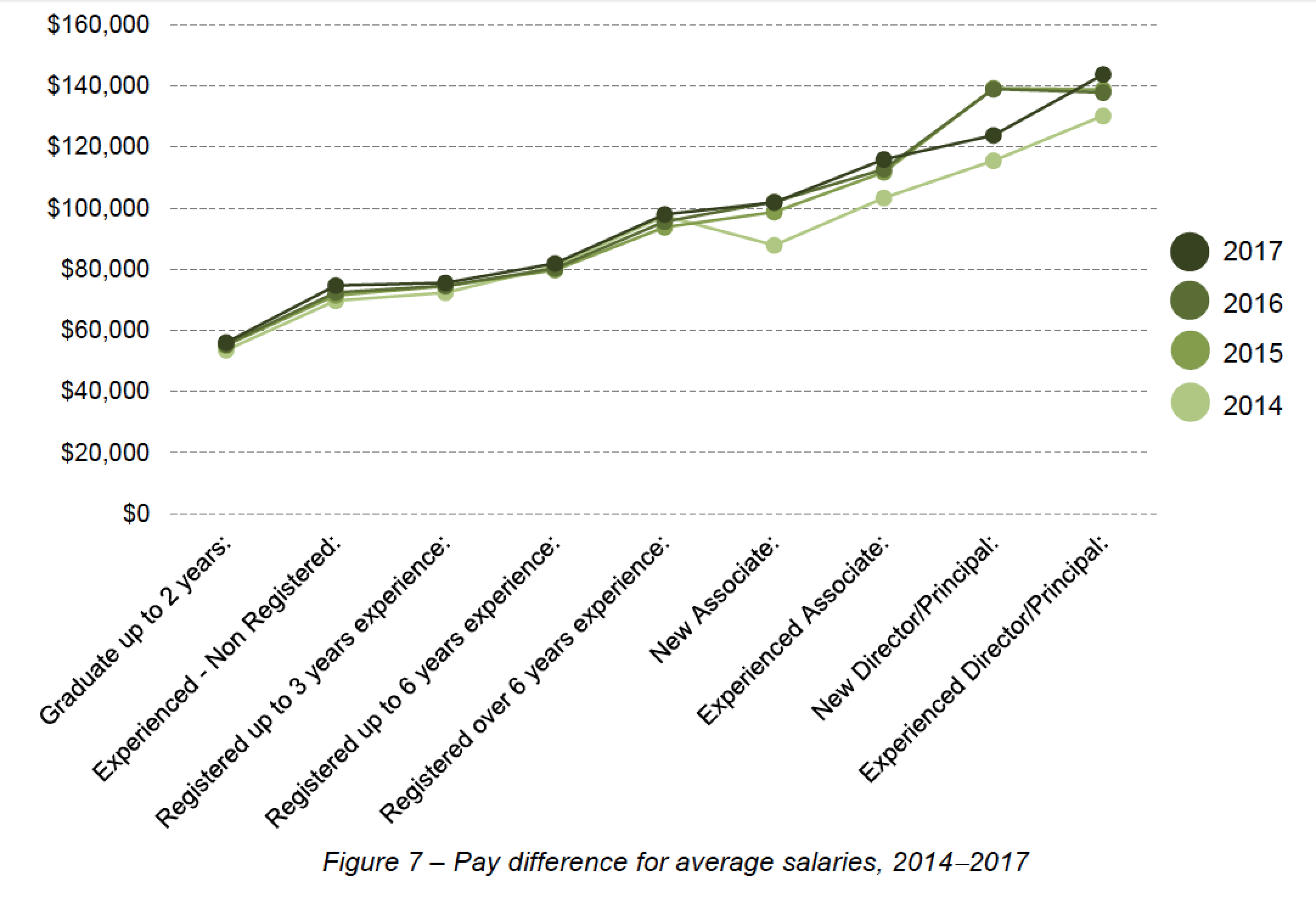 ACA is very concerned to note that some practices appear to still be paying below the minimums stipulated by the Architects Award, and that this trend has increased rather than decreased! Nineteen firms (17% of those surveyed) reported salaries below Award. In the worst case, the category ‘Graduate up to 2 years’, the lowest figure stated was 37% below Award.

The Award rates in place when the survey was conducted were $47,721 for an entry-level graduate, and $55,171 on registration (with two more stepped increases after that point) and for experienced but not-registered. Of even more concern is that the Award does not include superannuation, while the survey does. This means that it is probable that even more of the firms who responded to the survey are paying below the Award.

The gender pay gaps for architects identified in previous surveys persist, and women continue to cluster in the junior categories rather than the senior.

Men earn more in all but two of the role categories, and in seven categories the extent of that difference is more than 5%. (In the two role categories where women are earning more, the difference is less than 5% and only for the average salary and not the weighted average). The surveys reveal a varying but continuing gender pay gap over time. Because the survey sample changes from year to year, it is not possible to say that the gender pay gap is definitely increasing or decreasing. The ongoing suggestions of gender-based gaps in this and other data are of serious concern, and monitoring the changes over time through the Salary Survey will help to trace the larger patterns at work. 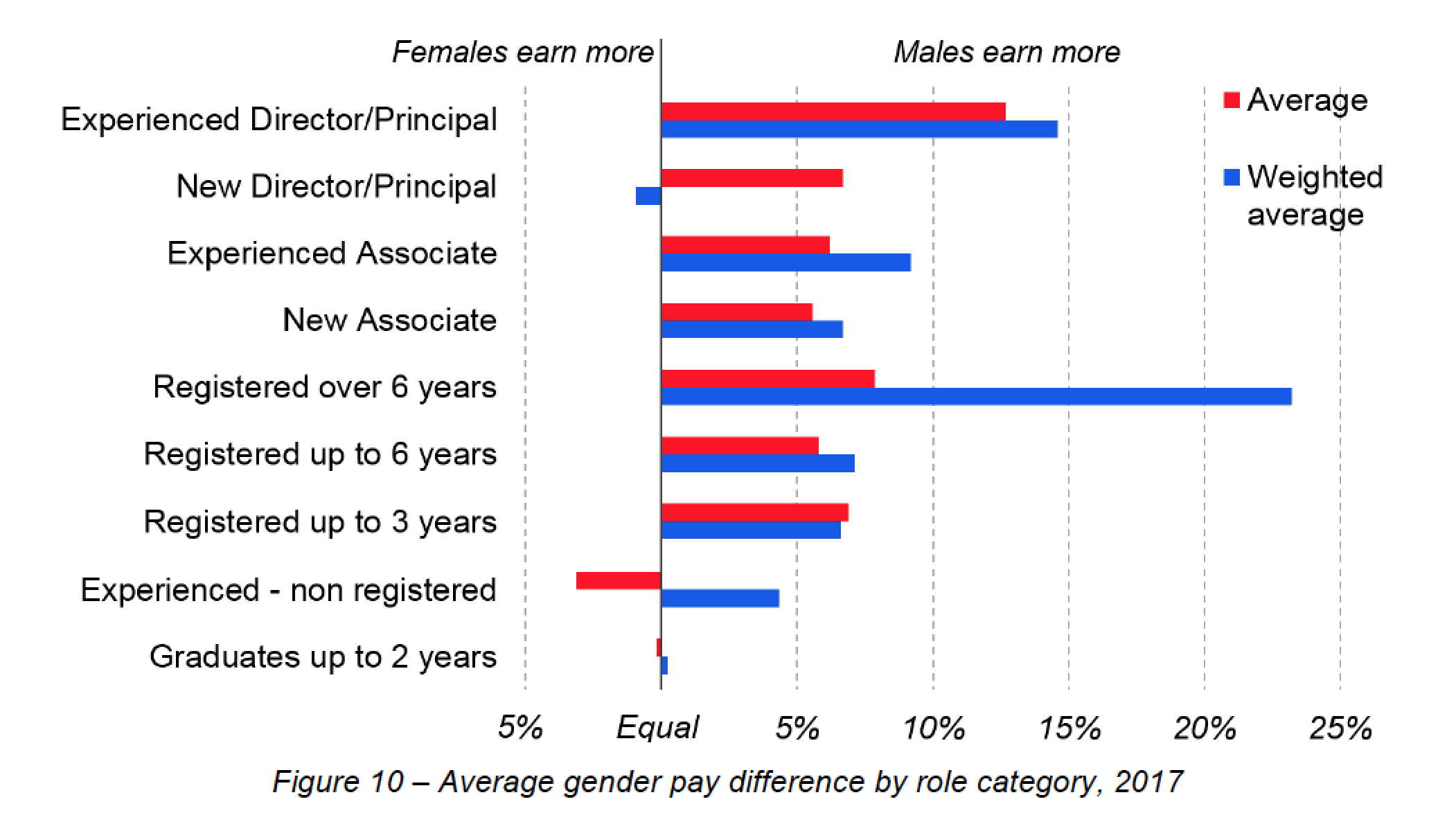 The full 2017 National Salary Survey report is available to ACA members. Members can log in below to access it. if you are not already a member you can find out more about joining the ACA here.