The ACA’s 2015 Federal Budget Impact Survey sought to better understand what the budget means for architectural practices and the profession. To complement John Held’s analysis of the findings, we present the results below.

The first set of questions aimed to provide a general understanding of the expectations of the impact of the budget on individual practices, the profession and society more broadly.

Seventeen people took the opportunity to respond further. The overall responses are less negative than last year, nonetheless there were few overtly postive responses. A number of respondents mentioned the tax incentives as potentailly having positive impacts for small business, but their is ongoing concern about the lack of leadership. particularly arounf envriomentmental matters.

“Builds general confidence in the economy.”

“Small business tax cuts good. Reduction in spending on Infrastructure, education and health not good for the building industry.”

“We would have liked more capital works funding for the local govt sector with which we specialize.”

“No meaningful national roadmap provided – it’s all down to market forces, in every single type of market.”

“Funds for infrastructure have little impact on smaller practice. And the small business tax incentive is a minor tax deduction on a purchase. It does not icentivise me to purchase an asset that I would not have already purchased out of necessity. Car, for instance, is not scheduled for change over until three years away, so an incentive within two years is no good.”

“The majority of our project commissions are related to state government funded projects, so unless the state government confidence and levels of investment in infrastructure occur I expect that we will continue to struggle to remain in business and profitable.”

“I will take the opportunity to replace some obsolete items of equipment to take advantage of the immediate tax deduction benefit.”

“We are a small business, hence will benefit from the reduced company tax rate and opportunity to write off equipment purchases. On the downside, continuing lack of leadership on the environment, housing and transport will continue to erode the profession’s reputation and ability to make positive contributions.”

“No tax incentives, no stimulation for development, no confidence in future for potential clients,  no reduction or removal of payroll tax, nothing in it to help architectural practices.”

“The complete lack of interest and investment in things sustainable or renewable is worse than negligent.”

“The tax write-off may allow us to upgrade some equipment, but the lack of climate change mitigation and adaptation funding will make our job harder.

“Cut back budgets for local government in Capital Works.”

“Lack of any clear vision for the future – ‘the future’ defined as winding back climate change policy, taxes and social programs.”

“There was little for infrastructure stimulus except in engineering infrastructure works which have little benefit for the architectural profession.”

“Mainly because most of the proposed measures were not passed by parliament!”

“A major project, which we were about to start construction, was canned. National funding for our client was significantly reduced. As a result we lost cash flow and had to let a staff member go after 12 years.”

“Have had an increase in work since mid-end of last year.”

“Last year was unfair and stupid.”

“Lack of funding and commitment to climate change mitigation and adaptation.”

“No certainty with so many projects on hold.”

Impact on the profession

“I suspect the effects will be different in the various states and territories as our economies vary widely. WA is finally in a proper recession, having largely avoided the GFC up to the end of FYE 2012.”

“If people take the $20K depreciation incentive as an opportunity to start spending then the increased cash flow may generate new work.”

“Builds general confidence in the economy.”

“Ability for immediate tax deductions for business purchases up to $20K and reduction in business tax rate.”

“Any government running in debt is not going to have a positive impact on most industries.”

“It should help the smaller practices with turnovers less than $2M.”

“IF, and only IF it goes through senate and gives population greater confidence, then it MAY increase consumer confidence in property development, new housing etc.”

“The budget fails to address Australia’s long term financial problems as it does not address the current imbalance between expenditure and revenue. Both Parties are not prepared to sacrifice popularity for real fiscal reform.”

“It will not stimulate the economy in areas that involve the profession more broadly.”

“Small business is obviously a winner, hence many smaller practices should benefit.”

“Developers will be reluctant to proceed with projects, architectural practices will continue to reduce in size or go out of business altogether.”

“The real problem is the government is firmly focused on the past and not the future. Policy that understands this would enable businesses to prepare now for the inevitable low carbon future we will embrace.”

Twenty-one people took the opportunity to comment further. Although some felt that tough meaaures are required, there is clear concern about the lack of engagement with the big issues such as climate change.

“Refusal to deal with climate change seriously is negligence and Australia is giving up the chance to be a leader in green technologies, which is where the new jobs are, the new economy will be and the future of the planet relies.  Instead, the old mining and coal fuel polluters have the ear of Government and green building response is still not taken seriously enough.”

“Define better off. Certainly (in my opinion) we’re better off than we would have been if the 2014 Budget had been passed.”

“Small business is the engine room and driver of economic recovery, so that budget support is good. Architects require a strong building industry and especially a culture promoting good design, so the budget has to be proven in those terms. Time will tell.”

“Too little understanding of the need to develop social capital, too little regard for the human aspects of nation building. Narrow focus on economic growth rather than a holistic approach. This budget is focused on the next election rather than addressing any long-term issues such as deficit and climate change.”

“Reduction in business tax rate should stimulate the wider economy.”

“Did not tackle sufficient expenditure reduction to make a surplus likely in the next decade.”

“Attempting to balance the budget is, in the long term, better than a continuum of budgets of larger and larger debt.”

“Australian society could do with focussing outward and being less conservative and self interested. Where are we headed in education, health, foreign aid, building relationships with our neighbours. Be less focussed on self-interest of mortgages and car purchases. We are spoilt and continue to maintain a spoilt child ethos.”

“Bringing the deficit down.”

“We must tolerate the short-term pain of fiscal cutbacks in order to return to a surplus budget, otherwise we will create unacceptable standard of living problems for the coming generations.”

“Lack of social accountability and fairness, lack of leadership on the environment, transport and housing will mean Australia will be diminished as an egalitarian nation.”

“Some sectors – small business – will be better off.  Other sectors will not be – health et cetera.”

“We need governments to provide inspiration, incentives and more investment for new business types, to support our scientists, research and education, to provide certainty. This budget will help to stimulate business in the short term, but with tax revenue down, and defaults and bankruptcy at an all time high, it is going to take some time for the economy to improve. Don’t think it is a good idea to cut OS aid to try making your budget in the short term look good!

“No. The sooner the Abbott Government is removed, the sooner Australia will be able to achieve a fair, egalitarian and regenerative future.”

“It’s still making things too easy for wealthy people, and the supposed trickle-down effect does not happen in proportion to the added wealth created at the top end. Plus the whole climate change problem is still something Abbott and Co do not take seriously. What the hell is Maurice Newman even doing in their ear?!”

“Nothing for the environment, renewable energy or addressing climate change. Libs are not interested at all.”

Who responded to the survey?

The second set of questions was designed to give a better understanding of the demographics of those who responded.

The majority of respondents were directors, partners or owners of an architectural practice. Respondents came from firms ranging from sole practitioners to firms of over 100 staff, with the profile of respondents reflecting the structure of the profession in that a large proportion of respondents ran small practices. A wide range of types of work was represented. 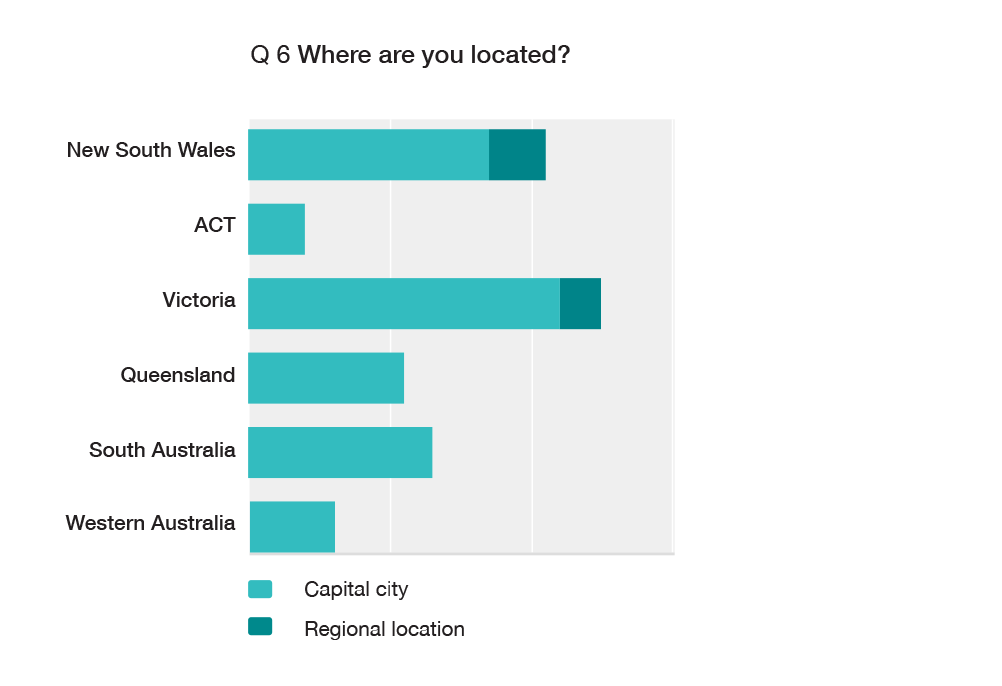 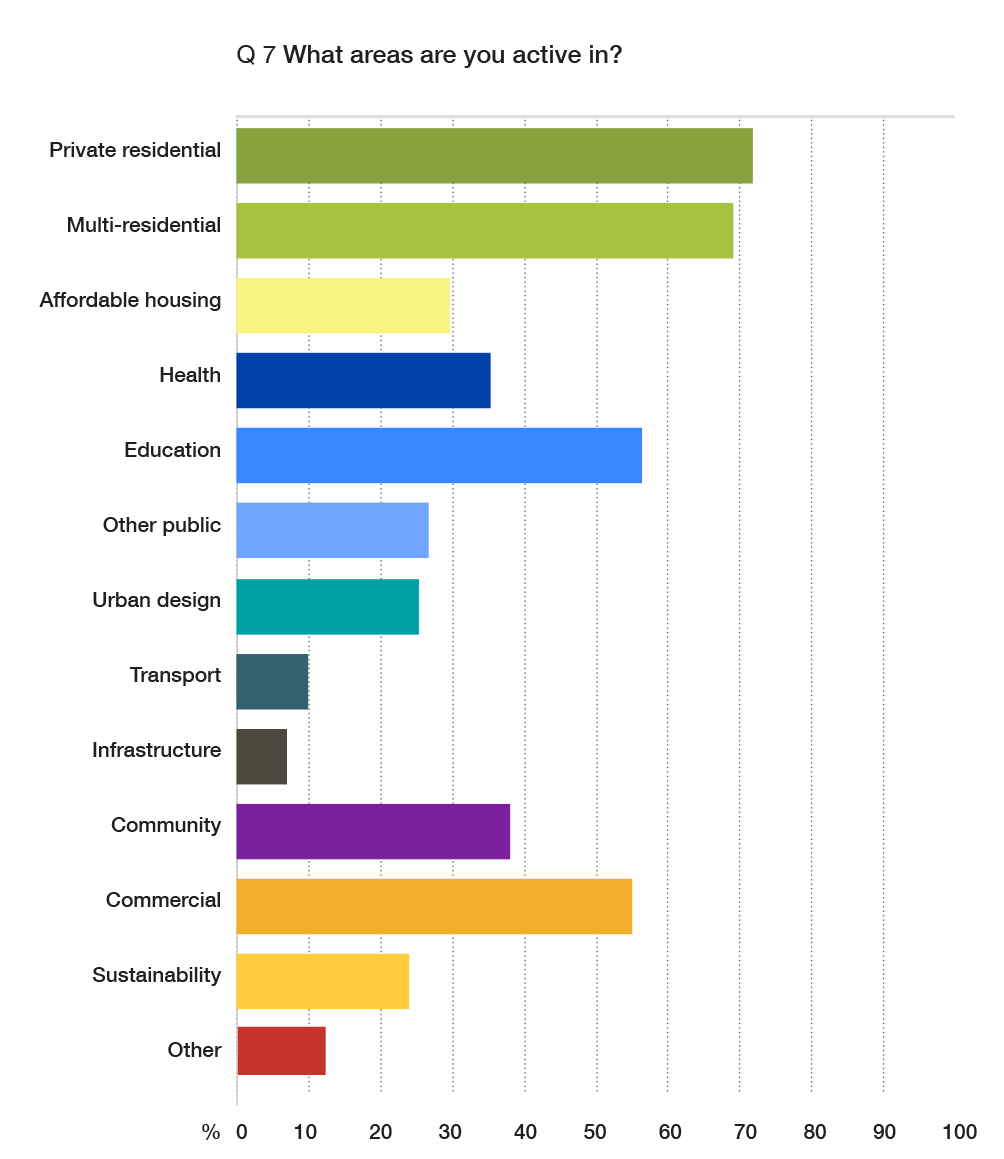 Respondents identified a range of other sectors in addition to those available in the tick box section, some of which provided a finer level of detail for available options. These included industrial, hospitality, research labs, heritage, aged care, police and justice, expert witness, specification writing, housing for people with special needs and local government.

How do practices plan to navigate economic changes?

The ACA was also interested to know if and how practices engage in business planning to help navigate shifting economic circumstances. The proportion of respondents indicated that they did has increased since last year. Comments include the following:

“Stay small and agile and NOT spend $20,000 just because a carrot has been dangled, and NOT employ someone unless there is an increase in education projects come into the office.”

“No expansion, no extra employment. Careful husbanding of resources waiting for  momentum in the market.”

“Yes. but hard to control workflow when fluctuations in the economy occur. We anticipate a stronger growth of the economy as a result of the recent budget and are looking to be adequately resourced for an upturn in our workload.”

“We constantly look at new markets and potential clients to try to iron out the bumps. Our business relies on both the private and public sectors but as the public sector budgets have been reduced we are concentrating our marketing efforts more on the private sector at the moment.”

“Will review what capital expenditure can be brought forward.”

“Would time purchases of any needed new equipment to take advantage of bringing forward the depreciation.”

“Take advantage of accelerated deductions to move forward some equipment expense by at least one to two years.”

“We will speak to our accountant about making best use of the equipment tax exemption, and make strategic purchases to update our office.”

“Cross-subsidise practice with teaching and ongoing study to train in other fields in order to balance out economic cycles in construction.”

“Will impact on budget planning for 2015/ 2016 with respect to both employment and purchasing infrastructure.”

“No changes because of this – we are planning for the future even if this government is not.”

“Take advice from tax accountant and corporate strategist on our own operations; work with advocacy groups on external matters that affect design for sustainability.”

The survey was open to all, and we aimed to get a broad a range of responses within the limited timeframe the survey was open for. We were pleased with the high proportion of responses from ACA members. The ACA will continue to advocate for better business conditions for all architects – and we encourage those who are not currently members to join us in this!